Separated by the Savannah River from the state of South Carolina, Savannah is a city steeped in history, and tradition, having been founded by James Oglethorpe in 1733.  It was Oglethorpe’s plan for the city, with 24 park like squares, that is largely what is now Downtown Savannah, which includes the Savannah Historic District, and the Savannah Victorian Historic District.  Although 2 of those squares are gone, the 22 squares and the surrounding tree lined streets and magnificent homes truly represent his vision for the city of Savannah.

Of course, having recently seen the movie, Midnight in the Garden of Good and Evil, and since I’m in the middle of reading the source book of the same name, written by John Berendt, and have started to listen to some of native son Johnny Mercer’s music, we were as prepared for our visit as we thought possible.

We started this morning at the Savannah Visitor’s Center  and History Museum just across from our hotel.  Inhabiting a historic Central of Georgia Train Shed and surrounded by the Georgia Rail Road Museum and Battlefield Memorial Park, there is a lot of history to be absorbed there, as Savannah was an important city during both the Revolutionary and the Civil War. 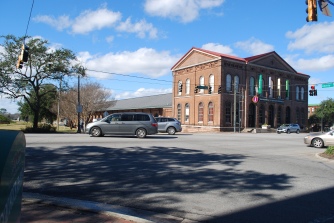 As we always like to do in a new city, we next took an Old Town Trolley tour, and got to see lots of incredible buildings and hear much about the history of this beautiful city.  Our guide Paul provided a lively tour hitting both the highlights and the low lights of the city, and referencing lots that we remembered from Midnight in the Garden of Good and Evil.

Would love to be able to share with you beautiful pictures, but unfortunately, the weather is a bit brisk in Savannah, and because of that the plastic windows were rolled down on the trolley, making picture taking impossible.  (Do hope you enjoy the picture of the back of our tour guide Paul’s head above) Oh well, perhaps next time.

After the tour, we thought it time for a bit of libation, so it was off to the Savannah Distillery and Ale House for a couple of their Pickled/Spicy Bloody Mary’s and a southern staple, some Fried Green Tomatoes! 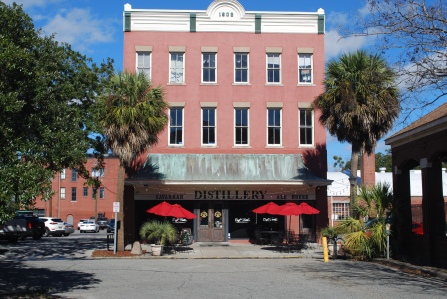 Then it was back to our hotel to write this blog, and to spend a little down time figuring out what we’re gonna do next!

Oh, and in case you’re wondering, the temperature has improved, and after a night of rain, the sun and blue skies have again made an appearance.  It’s windy, and in the 60s, but still better than what it is at the beach in New Jersey!

Tomorrow Florida, but first a visit to B&J’s Steak and Seafood in Darien, Georgia and SHRIMP!!!  See you there!

One thought on “Savannah”