Susie and I arrived back on Pennlyn Place the afternoon of Saturday, March 14th, after making the trip from my cousin’s house in Barefoot Bay, Florida in just two days. Kenny and Chris returned from Iowa, their last weekend of work, on Monday, March 16th. Since then, for the past two plus weeks, our lives have been materially different than any other similar period, and probably much different than any other stint in any of our lives ever will be. All because of a virus, that has the unfortunate happenstance to share a name with a very popular Mexican beer! So what’s been happening??

Well, first of all, we are very fortunate to be in the position we are. Unlike so many of the folks in the world who either have to go out into the working world daily because they are deemed “indispensable”, or else are at home and no longer getting a salary because they worked in industries that were not considered “essential”, we are in the enviable situation to still have our Social Security and Pensions direct depositing into our accounts. Secondly, we live in a small beach town in one of the southern most counties in the state of New Jersey, so unlike our fellow Jersey residents, who live in the congested New York Metro area, our Corona virus numbers are low. Thirdly, we are fortunate to have “Our Boys” with us (Kenny and his husband Chris) during this stay at home time, and as Susie and I are more in the demographic that all the reports say this virus is even more dangerous for, Chris and Kenny have not let us go to the grocery store, CVS for prescriptions, or the very necessary liquor store for supplies.

We’ve taken on some interesting jobs, that should have been done a long time ago, but we are putting the time to good use. We’re doing things like organizing the freezers in the house!

We’ve been exchanging texts and photos with our daughter Krissi, who along with her husband Mike live in Astoria, NY, and who have been working from home, even if sometimes she feels she needs to dress like she’s at work to get the job done!

We’ve been Face Timing with our son’s family in North Carolina, and wishing our Grand Daughter Layla a Happy Sixth Birthday! 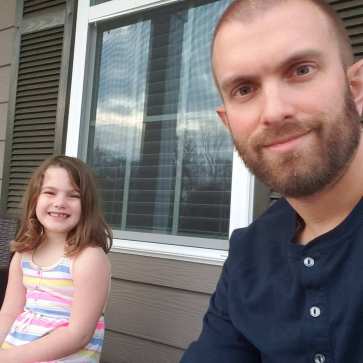 We’ve been playing games. We’ve done Sequence, 5000, and May I, and there is a threat of Monopoly, but we are not sure as a family if we are ready for that.

We’ve been watching our two Dancer/Singer/Actor fellow residents trip the light fantastic in our kitchen!

Susie worked on a very difficult puzzle! It was one given to us last Christmas by our neighbors and friends Patti and Meade, and was a nautical chart of the Ocean City area! The puzzle was started on Sunday…

Continued to work through it on Monday (look at all that blue!!)

And it was successfully completed on Tuesday! I’d say it was a “family project”, but honestly Chris, Kenny, and myself had just a little involvement, with the majority of work done by our Puzzle Master, Susan!

Did I mention we’ve been drinking? 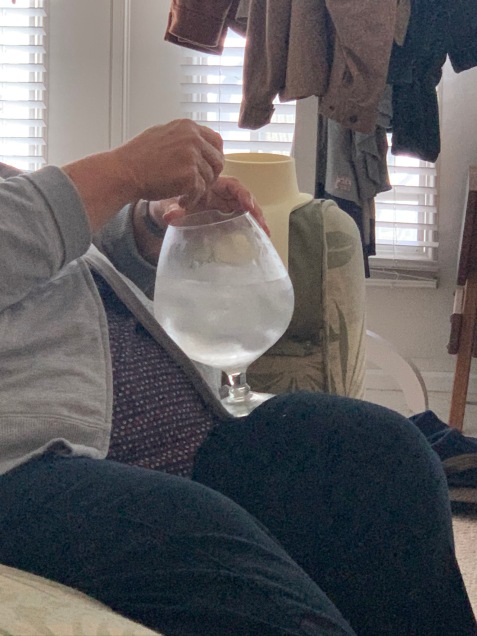 But sometimes we also cooked! These were some stuffed mushrooms I made last weekend!

And sometimes we combined drinking AND eating! What an idea!

And the old school play book has come out too, and Susie has made some delish old school recipes like a family favorite Spinach/Rice and Meat, and yummy Chicken and Dumplings!

We’ve also ordered in food! In an effort to help support the local restaurants that we love, we have bought gift cards to use when this is all over, and ordered take out several times during the last two weeks! We’ve enjoyed Sunday bagels from Hot Bagels and More in Somers Point, which sadly seems to have closed for the duration of the lockdown, We had a great dinner a couple of nights ago from Sal’s on Route 9 in Somers Point…lots of great food for an incredible price! But in keeping with our usual habit of you being able to find us on any given Thursday night at Angelo’s Fairmount Tavern in Atlantic City, for the past three Thursdays, we have ordered from them! For an incredibly reasonable price, we have gotten so much good food, including their incredible salads, a huge tray of an entry and another of pasta, and even wine and dessert! 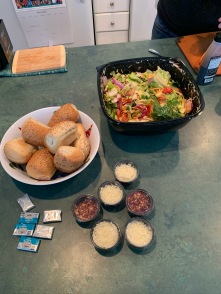 Okay, so what other things have we done beside eating and drinking? Well, Son-In-Law Chris has worked with Susie and picked up knitting again! He’s knitted a couple of things and continues to work on his technique! 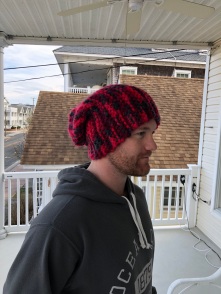 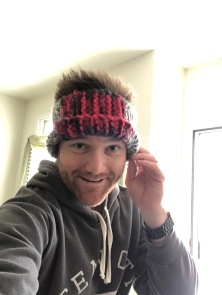 Speaking about the boys, they have gotten involved with Chris’ sister Michelle and her on line fitness classes! She lives out in Reno, and conducts a class at 9:15 Reno time on Monday, Wednesday, and Saturday! No way the boys could handle that, but at the 12:15 Eastern time her class starts in Ocean City, they are in it all the way! After the half hour or so of the class, they come out of the den everyday dying, but every morning of her class, they are back in it, using their cans of tomatoes or jars of pickles as weights, and enjoying the work out! They’ve even gotten our neighbors Patti and Meade involved!

Patti and Meade have also loaned the boys a couple of bikes, and they have been riding around the neighborhood, but the weather has been kind of on and off this last week, with some damp, cold, and windy days…definitely not March going out like a lamb!!

Susie and I have taken to walking around the neighborhood. We keep crossing the street when people approach to practice proper social distancing, and somedays when the wind is blowing cold off the ocean, it’s not fun, but we have to do more than sit on our butts! Today, we passed a house we’ve probably walked, biked, and driven by hundreds of times, and saw for the first time this cute lawn statue! 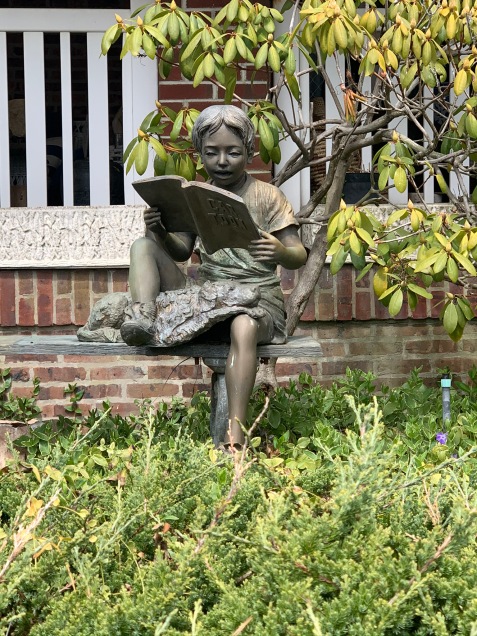 We are also so thankful that if we have to be doing this staying-at-home thing, we live in a time when we are blessed with the most incredible digital entertainment venues of all time! Susie and I have tried to be sparing and not binge watch shows, but we’ve finished the current seasons of Grace and Frankie, The Kominsky Method. and Lost in Space, but we still have episodes to go in The Marvelous Mrs. Maisel and haven’t even started the Ranch or Jack Ryan! Kenny also told us that one of our favorites, Bosch, returns in a couple of weeks, so we’re looking forward to that! Then there are old movies on TCM that we’ve been recording. Today we watched the original version of The Taking of Pelham 1, 2, 3 with Walter Matthau, Robert Shaw and an incredible cast of character actors from 1974! We’re even starting some shows that were big hits, but that we’ve never watched! We are 11 episodes into the first season of Cheers…which went 11 seasons and 20+ episodes a season! Then there’s Facebook, and online news sources that we read daily. I refuse to watch TV news because I don’t need any more bad dreams than I already have!!

What else?? Well, Susie dug her craft boxes out of storage, and she’s revisiting some of the projects she’d had in the planning stages. These boxes have been in storage for several years, and honestly, she has lots there to keep her busy! If she only had a few more corks! 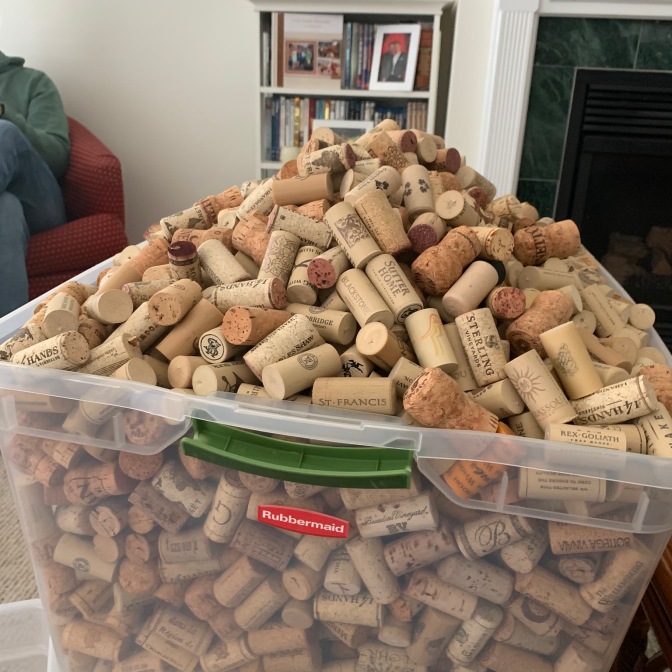 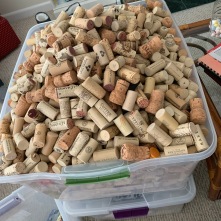 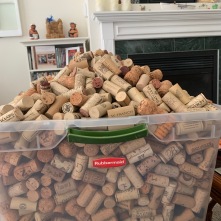 But, it’s not just staying home and keeping our distance from friends and neighbors, but also other things that we’re having to put on the back burner…like my second knee! When we left in January, I’d made an appointment for this next week to get the process started for my second knee. My left knee was replaced July 11th of last year, and I hoped to start the procedure next week, so that I could get my right knee done sometime in May or June. Well, that’s not happening, so I postponed the appointment to the middle of May, and honestly, that’s probably not happening either. Like so many other things in our lives that are on hold, it will wait, and I’ll start the process again when it’s more appropriate! One silver lining of that cloud…I no longer have to be under a certain weight goal by next week, so pasta, bread, and rice are back on the menu…for a little bit!

So there you have it. I don’t expect anybody to read this, and honestly wrote it more for myself. If you do get a kick out of some of the things the D’Elia/Fox shut-ins are doing to pass the time, that’s great, but if not, that’s fine too! Remember we are all in this together, and we can beat this thing! Just please be smart, follow the guidelines, keep yourself and your family safe, and be ready to live again when this crap is in our past! Love to you all from our family of shut-ins and our little beach town in South Jersey!