A little after 8 AM this morning, Amtrak’s Train #3, the Southwest Chief pulled into Los Angeles’ Union Station, and our Sea to Shining Sea trek all aboard the rails was done!  It started Wednesday morning, in Philadelphia’s 30th Street Station, and since then has included three different trains, four train stations, three nights in a sleeper bedroom, and six different Amtrak meals!  We traveled from sea level on the Atlantic Coast to sea level on the Pacific Coast, and in between went through the Raton Pass Tunnel at an elevation of 7,588 feet.  Our thoughts?  We loved it!  We both agreed that although we may never go on another sleeper train trip, if the opportunity arose, we wouldn’t hesitate to do it again!  But do it again or not, Susie got something checked off her bucket list, and we didn’t have to walk around an airport shoeless and holding our pants up!  Here are a few views of our last morning on the train. 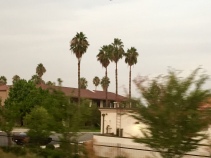 At Union Station, when we asked our Car Attendant Pinky about baggage claim, she pointed us to a little Red Cap electric transport and said, “Just tell him you need to go to baggage claim and he’ll take you.”  Well he took us all across Union Station (and it’s big) dropping one passenger off at the Red Line, two others at the bus to LAX, and then us, first to Baggage Claim, and then to the Hertz counter.  The Hertz counter was a zoo, and after waiting for 45 minutes, we found out why.  They came in this morning with 7 reservations and 7 cars, except that Hertz corporate’s computer allowed 20 other people to reserve cars that didn’t exist!  Luckily, when they saw we were Hertz Gold members, they took us to the car that had been reserved for us, a Ford Explorer, and we were on our way to Kenny and Chris’ apartment (only after Susie contributed her pen to the effort, as nobody at the Hertz counter had a working pen!).

Kenny met us out front, and we put the Explorer in their garage space, since they no longer have cars, and we went up to their apartment.  What a change from a year ago when we were last there.  It went from a lovely apartment, to a moving staging zone!  In the past couple of weeks, they have sold their couch, their TV stand, and their bed frame.  They are sleeping on their mattress on the floor in front of their big screen TV, and their living room is full of boxes, bubble wrap, and packing tape!  What a difference.

We left in short order to do some errands they needed wheels to do – drop off some donations, mail some boxes at the Post Office, and hit Home Depot to pick up more packing material.  Then it was back to their apartment, and as they packed boxes, I helped Susie bubble wrap some of their art work that wouldn’t fit into boxes.  Tomorrow we’ll pack the two SUVs, and transport as much as we can to Chris’ Dad’s house in Reno.  Speaking about two SUVs, now it was time to get Kenny and Chris to the Hertz office at LAX to pick up the SUV they’d reserved.  We’d both reserved Hyundai Santa Fe sized vehicles, and they hoped they’d get something as big as the Explorer we had.  After they texted us that they’d gotten the car, we left for the Del Taco we’d agreed to meet at for lunch.  Imagine our surprise when the boys showed up in the mother of all SUVs, a huge Ford Expedition!!  They’d been upgraded!  Great luck we all said.  You’ll have absolutely no problem accommodating everything you need to take to Reno with this car!  And it was great, till the other shoe dropped.

The boys live on North Sycamore, just a half a block from Hollywood Boulevard.  The Grumman Chinese Theater is a block away, and the Roosevelt Hotel is just around the corner.  They are dead center of the Hollywood Tourist area.  Take a look at this map, and you’ll see what we mean. 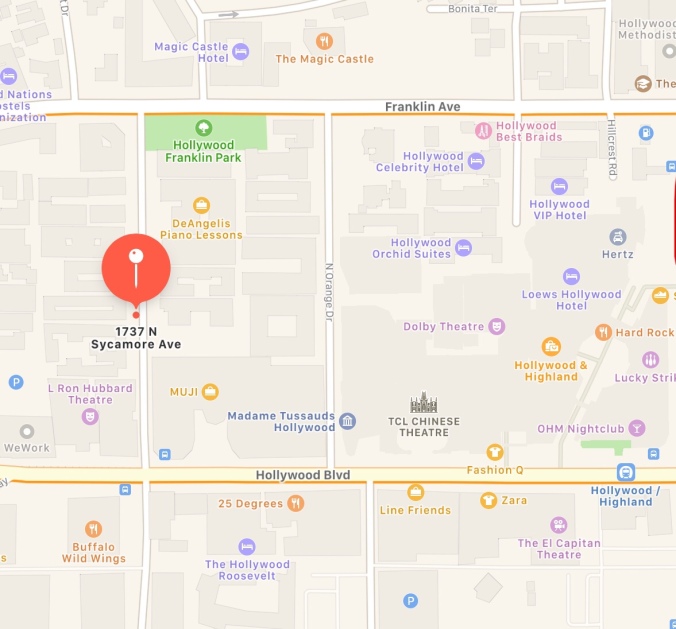 Because of this, you need a resident permit to park on their street.  Because their apartment came with 2 parking places, they’d never needed one.  But guess what?  That BIG beautiful Ford Expedition SUV was TOO BIG (Kenny might have put a word between those 2 words and it might have begun with an F and ended with an ing) to fit in their garage!  Shit!  What were they going to do now!  Mom and Dad to the rescue….that big Expedition is parked at our hotel, and our Explorer is in their garage!  Loading will be a little more of a pain in the ass, but as I told Kenny, just one little bump in the road, leading to the happiest day of their lives, now just one week away!

After doing their laundry (the laundromat they go to is just across from our hotel), we headed to Ralph’s to buy some supplies for us.  You know, important things like like vodka, wine, iced tea, bathroom spray, and snacks for the road. Then they drove our car to their garage, and packed their bags for Reno, Lake Tahoe, and their WEDDING next Saturday!!  Tonight LA Greek food for four in our hotel room, then tomorrow morning we pack both cars, and head off to Reno!

Tomorrow will be a road day, as we’ll spend most of the day driving to Reno, so there may not be enough for a full blog post, but hey, you never know!  The next week we will be in Reno doing wedding prep, spending time with our new family, and welcoming our own family as they arrive later in the week!  It’s going to be a wonderful week, and I’ll blog if I can, but please excuse us if there  isn’t time to keep you completely up to date!  Know that we’ll be having fun with people we love, sending our second child into the world of married life!