Well, after 3 quick nights in Walt Disney World, it was time for our happy band to depart and continue our western trek. The boys were driving all the way to New Orleans today, so they were up and out by about 7:30 this morning. Susie and I were just going to Pensacola, Florida, so we left later. About 10 AM we said goodbye to rooms 7115 and 7116 and Port Orleans, The French Quarter, loaded up the car, and drove down to the main building to check out. I don’t know what elicited a sadder feeling…leaving WDW, or the 3 page bill I was handed by the hotel!

I’m just kidding. What with the free park admissions we got for 3 days, we saved well over $1400 that we’d have had to pay were I not a Disney Retiree. Then there were the discounts on the rooms, some of our meals, and stuff we bought and probably the entire stay cost us 50% of what anyone else doing it would pay, so no reason to complain! Yesterday when I was checking out at the Sassagoula Food Factory, I passed my retiree card to the cashier, and the lady behind me said, “Oh, how can I get one of those?”. I replied, “work for the company for 40 years like I did”, at which the cashier made a face and said, “No way!” Oh well, thanks for buying ABC Disney!

This time we were heading north/west out of WDW, and unlike when we came in via Interstate 4, we exited to surface streets. We quickly knew why Walt Disney wanted a huge area in Florida unlike what he had in California, so that he could protect his visitors from road side clutter. Here are just a few examples…. 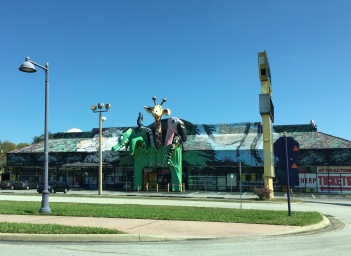 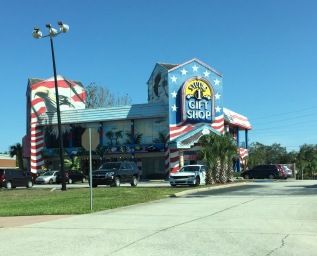 Funny how few cars were lining up for $5 “Disney” T-shirts!

We made a slight detour to our route today, which added less than 15 minutes to our estimated arrival time, but we think it was worth it. A slight side trip to Minneola, Florida. Okay, so they can’t spell in Florida, and it’s a city not a village, but as we get to the last months of being Mineola, NY residents, we couldn’t help but check out Florida’s version. I think we’ve got nothing to fear at home, unless our village wants a digital sign, which looks very much like the sign at the new Walgreens on Jericho Turnpike and Roslyn Road! 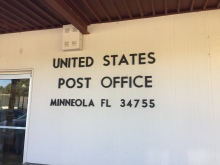 Susie says that she doubts if the Minneola Grill can top the old Jericho Diner, but we didn’t take time to stop and compare!

Tonight we are in what looks like a brand new Hampton Inn and Suites on the side of Interstate 10 in Pensacola. Having driven 450 miles today, and crossing into the Central Time Zone for the first time since last October, we were happy when we pulled in to see a Cracker Barrel Restaurant right across the street. The couple of times we ate at them during our trip last fall, we enjoyed the meal and the value, and we loved this one’s close location. After our customary after driving drink (a ADD), we decided to head over and have an early dinner. We then had to gas up the car, pick up a couple of things at a Walgreens, and then find a Wells Fargo bank and get some money. Just after 6:30, we headed across the street, parked the car, and entered the restaurant to find complete pandemonium!! A tour bus full of high school kids had just descended on the restaurant, and we couldn’t even get to the counter!

Despondent, we decided to do our chores and thought perhaps we might find some place else to eat during our travels. Well, we got everything done (no thanks to Susie’s phone’s GPS that led us about 3 miles in the wrong direction before telling us to “Make a U Turn”), but unfortunately found nothing but fast food that wasn’t a zoo, as it was now after 7 on a Friday night! We decided to try Cracker Barrel again and I dropped Susie off and parked the car. When I got inside, she said they said about 20 minutes, and in less than 5 they called her name, so we did eat at CB, only somewhat later than expected! 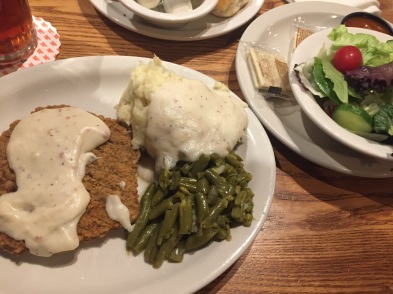 So that pretty much gets you up-to-date on today’s travels. Tomorrow morning we will leave about 9:30 and travel what the GPS says is 3 hours to NOLA, and the reunion with our twins and company. I’d like to tell you I’ll be back with an update tomorrow night, but it is Saturday in New Orleans, and we will be with Krissi, Kenny, Mike and Chris, so anything can happen!