If you Google Irish Wake, this is what you get:

Well this pastTuesday night, at the Cutting Room on NYC’s East 32nd Street, former WPLJ VP of Programing Tom Cuddy did what Cumulus couldn’t or wouldn’t do… he hosted an incredible “Irish Wake” for a great New York radio station, and it truly was a “glorious send-off of departed loved ones”!

If you remember a blog I wrote back in March about Cumulus selling WPLJ (if you don’t remember or didn’t read it, and want to, here’s the link  https://fdthird.wordpress.com/2019/03/11/95-5-wplj/), this was something that most of us who worked at the station through the years never thought could ever happen!  Separating the AM/FM siblings was not even fathomable to us, but it happened.  Welcome to the radio business, 2019 style!

So rather than let it go out with a whimper, Tom Cuddy decided that he was going to make sure that it went out with a bang,   It was a hell of a party, attended by folks who in one way or another had been part of WPLJ in the 48 years since it’s call letters were changed to that from WABC-FM.  Having spent 40 years of my work life there at WABC and WPLJ, there were years worth of memories, and people to sort through.  It was an incredible night!

After Ubering to the city from our daughter’s apartment in Astoria, Susie and I started our night with a little pre-party at The Ginger Man on NYC’s East Side.  We called this a “70’s Party”, and the guests included folks that were at WPLJ when I got there in 1976, people that started about the same time and I did, and folks that got there shortly after I arrived. 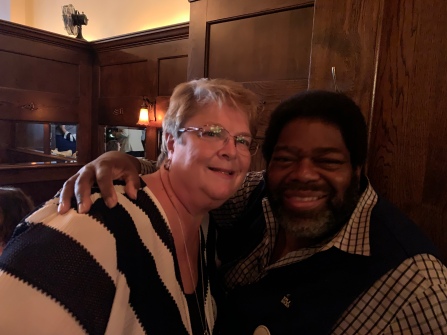 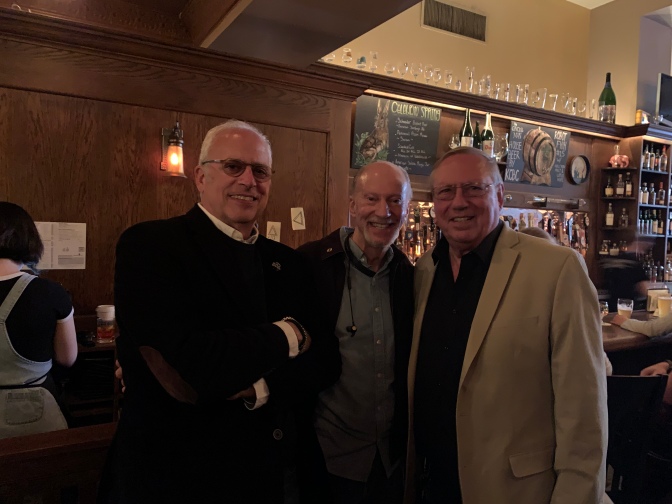 I’d have to say that this really is our core group, as we were all about the same age when we started at ABC.  Because we were the same age, and several in the same family situation, we not only worked together, but we socialized.  Birthday parties at work, drinks after, visits to each other’s houses, Good-bye and Batchelor Parties, Weddings, and oh yeah, working together.  It was universally agreed by Engineers, DJs, and office folks that this was indeed the best time of all our work lives!  Sometimes in my later years at ABC, when I’d complain to Susie that I kind of felt left out, when younger folks went to lunch or out for drinks after work, she’d remind me that when we all were their age, we did the exact same thing!  Point Taken!

So as it approached the 6 PM start time of the real party, we all settled up our bar bill at the Ginger Man, and started out on the 4 block walk to the Cutting Room (http://thecuttingroomnyc.com).  Because this party had been widely publicized in the radio trades in an effort to reach as many alumni as possible, you needed to email in a request to come and be put on a list. As we got to the club, there was a line of folks waiting to check in.  Of course, after working at the stations for 40 years, there were lots of folks I knew, and luckily I remembered everybody’s name!! 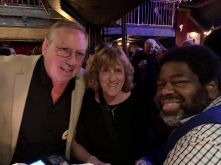 After a period of mingling (there were probably 400 folks there, so there was only so much mingling and hugs that one could do), our host Tom Cuddy opened the evening’s presentations.

Tom Cuddy…our host for the evening

Our friends Jimmy Fink and Jim Kerr spoke, talking about those early years of WPLJ and how they were tied to today’s WPLJ.

Scott Shannon talked about his years at PLJ during which he captained the PLJ Morning Show!

Then Tom Cuddy brought the two longest term morning show hosts in PLJ’s history to the stage, both of who still hold forth on New York Morning Radio…just not PLJ!

At one point, Tom Cuddy asked everybody in the room who’s voice had ever graced the WPLJ airwaves to come on stage!  That was a hell of a picture! 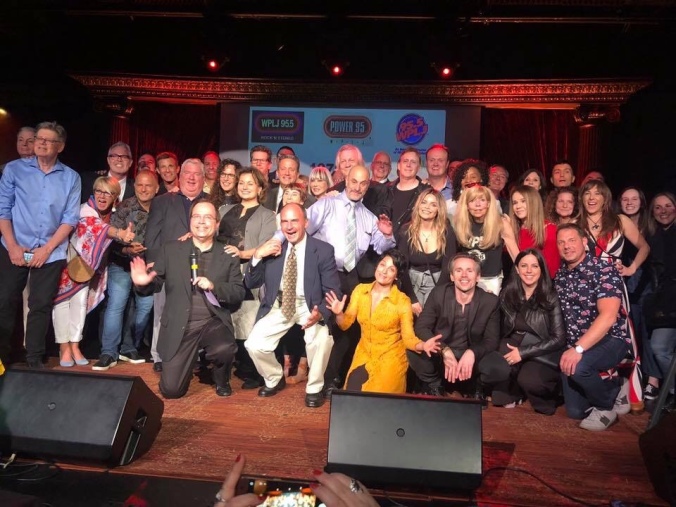 An incredible group of voices and friends

But as many of those folks as there were, that was just a fraction of the folks in the room!  There were several past General Managers like Mitch Dolan and Steve Borneman,  production people from Jim Brownold in the 70s, to today’s Dan Kelly and Phil Micari, lots of past and present Engineering folks, Sales Folks, and office friends that kept the radio station running!  It was a wonderful night for me with so many old and new friends! 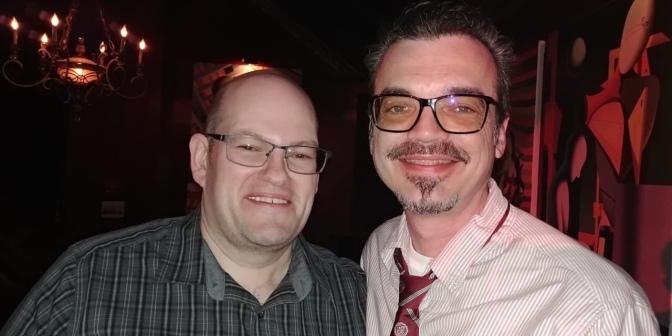 Two of my favs..Frank & Harry

But remember when I started, I called the gathering a great “Irish Wake”, and sadly, that’s truly what it was.  Had it not been for the sale of WPLJ by Cumulus, and the transfer of the station on June 1st, and the fact that so many of the folks that I stopped working with a little over 3 years ago will be without a job after May 31st, there would have been no reason for the party.  Like an Irish Wake, Tuesday night’s gathering was indeed, in a way, the glorious send-off of departed loved ones.  That’s a radio station, and the people that still call the 17th Floor of 2 Penn Plaza home!

I want to end this blog by copying something I posted on Facebook the night of the party.  We spent the night at our daughter Krissi and about to be son-in-law Michael’s Astoria Apartment….they get married in just a couple of weeks on June 15th.   A little before midnight, while Susie was settling down to sleep, I was sitting on the edge of Krissi and Mike’s sleeper couch, and using my iPhone, I posted this to Facebook along with some pictures:

“I walked onto the 8th floor of the ABC Building on August 8th, 1976, and I left the 17th Floor of 2 Penn Plaza on January 29th, 2016.  Between those two dates, I had the honor of working with some wonderful radio folks at two great radio stations. Tonight, thanks to Tom Cuddy, we got to say goodbye to what will always be to me 95.5, WPLJ…New York’s Best Rock!  At the end of this month, PLJ will no longer exist as Cumulus has sold the station to a Christian Broadcaster.  It was great being with old friends,  I’ve known and worked with for over 40 years, but sad for my friends who still work there.  Thank you to the love of my life, my ever patient Susie Q who endured her husband hugging and kissing folks all night (men and women…hey, I’m Italian) and having a great time. It was a night I will long remember filled with people from my youth, and folks who are younger then my kids!!!  I love you all, but especially Susan Johnson D’Elia!!”

Good Bye WPLJ…God Speed to all the great radio people who will ride it to the end on May 31st!  You are in my heart!

All Access’s story about the party: