When our kids were little, and the entire family lived on Long Island between Bayside and Huntington, Christmases were a lot easier.  It was totally expected that we would all be together in part or whole on both Christmas Eve and Christmas Day, and the only thing we had to worry about was a forecast of snow, and traffic on the Long Island Expressway!  But times change, kids grow up and head out on their own, parents die, people retire and move, and traditions change.  In other words, life happens.  Take our family, and Christmas, 2018.

Shortly after their October wedding, Kenny and Chris started their Liberty of the Seas contract with 2 1/2 months of rehearsals in Miami.  They had about 10 days off from rehearsals for Christmas/New Year, and they spent part of that time with us in Ocean City, so they were the kids we shared our actual Christmas with this year, and we tried to include just about every D’Elia Family Christmas tradition we could.  One set of kids done!

This past weekend, it was time to share our second Christmas up in New York with Krissi and Mike. Susie and I haven’t been back to Long Island since mid-September, so it’s been close to 4 months since we’ve had the joy of Long Island traffic, but we made our way safely to Mike and Krissi’s apartment in Astoria. The plan was a low key Christmas, without a lot of the traditions, just enjoying a couple of days together.

In the course of the afternoon, Krissi, with her Mom’s help, put up a picture shelf in their living room, while Mike and I helped with advice and comments on their progress.  Then Mike announced that it was 5 o’clock, and drink time!  The Master Mixer went to their bar, and shook us 4 excellent vodka martinis that just hit the spot!

Dinner that night was too many yummy appetizers and wood-fired pizzas at Milkflower, and then we returned to their apartment, drank eggnog, and opened Christmas presents while watching a Christmas movie!  As is usual, Kristen Anne didn’t make it to the end of the movie! 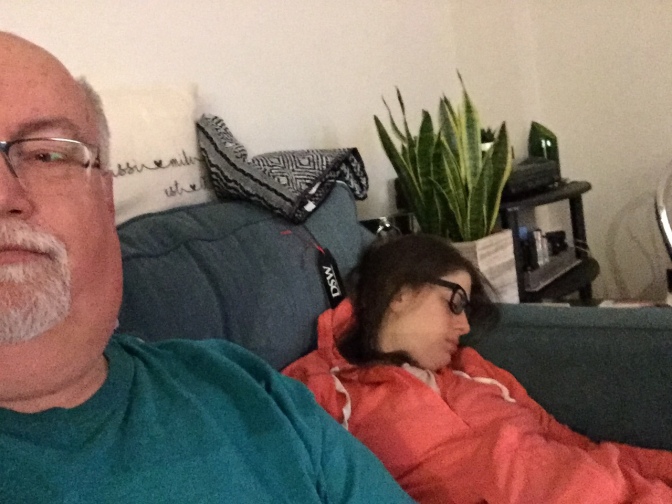 The next day we all enjoyed a great trip to the Museum of Moving Image, which is just a couple of blocks away from their apartment, and across the street from the Kaufman Studios.  Among the many exhibits was one dedicated to the late Jim Henson, and all the wonderful work he did during his too short life.  Of course, well known to our family were his Muppets, and older son Billy’s favorites, the characters from Fraggle Rock! 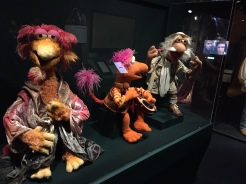 They also had an exhibit on “ancient” computer games, where we saw our first computer, a Commodore 64, and lots of Nintendo games Susie and I remembered from when our adult children, weren’t!  Krissi and Mike enjoyed going back to the last decade and century. 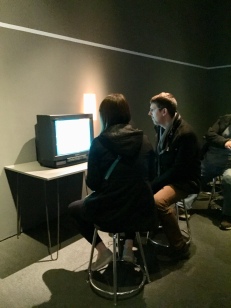 Mom and Dad Ubered home, and while waiting for Krissi and Mike to arrive, commented on what a gorgeous sunset was in progress.

The kids suggested that we visit their building’s roof (where they will get married in June), and we got some wonderful pictures of the New York skyline. 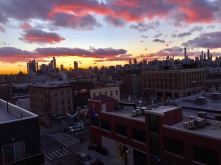 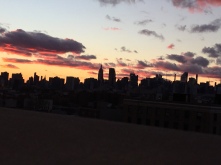 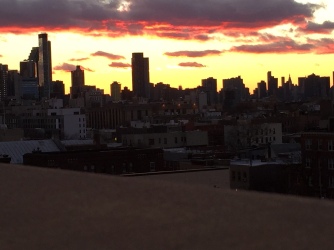 Also, thanks to Mike’s long arms, a good selfie!

Dinner that night, was totally decadent Greek Bowls from Crave, followed by some TV…and another martini!

We said our good-byes to the kids before bed, because they’d be up and on their way to work long before Mom and Dad crawled out of bed!  Monday we had an Eye Doctor appointment, so we killed some time driving around Jackson Heights, where I grew up and lived till I was 19, before heading out to Whitestone and our Eye Doctor!

We wrapped up the weekend by visiting one of our favorite old Mineola haunts, the St. James! (after Susie had her nails done!) It was great to visit with our bartender friend Dennis and our waitress friend Mo, and experience one of the things we truly miss from our 31 years in Mineola! 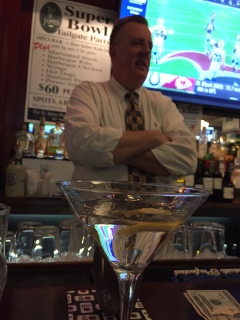 We also passed this very Christmasy house on Roslyn Road, just around the corner from where we used to live.

By the way, back when Billy was a little kid, we had church friends that lived in that house, and one morning, Susie delivered our friend’s baby in her bathroom on the second floor.  The house didn’t look like this back then!

Oh, and remember me mentioning traditions back in the opening paragraphs?  Well, after 2 years of living in North Carolina, our oldest misses some of the traditions he grew up with.  Specifically, Billy told us he missed our Christmas Eve tradition of Spicy Shrimp Sauce over Linguine, and Baked Clam Stuffed Lobsters, so on January 19th, we are heading down to Raleigh for Christmas 2018, #3!  Even though the presents have already been distributed, and the tree will be gone, he wants a taste of our old traditions to go along with their new Christmas Eve tradition of North Carolina Bar-B-Que.  Sounds good to us!!