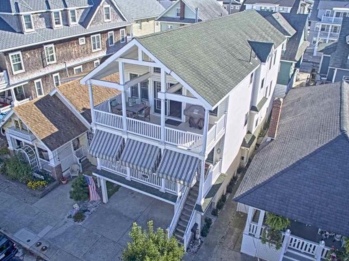 So, when we last left you, we’d taken possession of 854 Pennlyn Place, and started our life as a landlord.  Now, was that something we wanted to do?  Ah, no, not at all, but with the help of our summer rentals, we could afford to own this wonderful place, but it was not without it’s issues!

Let’s start at the very beginning, the night of January 28th, 2005!  We’d closed on a Friday afternoon, and that was to be our first night sleeping in our new beach house.  Let’s just say, there were times that night when we wondered what we’d done!  It all had to do with a very interesting upstairs tenant.

Let me back up a bit, and explain a bit about 854 Pennlyn.  In the old days, we’d call this a Duplex, or a Two Family House, with two 3 bedroom 2 bath domiciles in the same building.  Today, it’s called a condo, and when we bought the first floor of 854, we also became members of the 854 Pennlyn Condo Association.  So the “upstairs tenant” was a tenant of our co-owners, who owned the second floor unit.

The reason we wondered what we’d done, was this upstairs tenant had a small dog, that spent the entire night running from the back of the house to the front of the house non-stop!  I haven’t thought about that night in a long time, but just writing that last sentence brought back the feeling of absolute frustration we both felt that first night.  The tenant was a pip, but as they say on TV, wait, there’s more!

Upstairs was owned by two young couples who had bought the property as an investment.  The husbands worked together and they both lived nearby in Egg Harbor Township, that was until one of them got transferred to Chicago.  It was the couple that got transferred that was the point person we were dealing with.

Turned out that the upstairs tenant was a co-worker of the husbands who was just in as a Winter Rental.   The couple we dealt with was very nice, and when I mentioned the dog, the wife said to me, “Wait…he’s got a dog?”  Turns out that the tenant had asked the landlords if he could get a dog, and they emphatically said, “NO”.  Strike # 1!  Then I discovered that he’d also asked if he could get a satellite TV dish installed on the house, and again the answer was, “NO”.  I’m sure you can guess what was hanging off the back end of the house…wait for it….yep, a satellite dish!  Strike #2.

We had very little interaction with the tenant, who apparently couldn’t figure out that we were coming down most weekends that first winter, because on a number of occasions, we’d find he or his girlfriend blocking the whole driveway!  That was until one weekend where we came on a Friday night and every light upstairs was on.  Same thing Saturday night and we never heard a sound all weekend.  When we came back the next weekend, we found the lights still glowing brightly, and again no sound upstairs.  I called the woman we dealt with, and told her that it looked like their tenant was gone.  Gone he was! 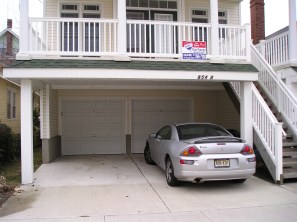 We saw his car…as close as we got!

As I said he worked with the husbands, and later found out they worked at a nationwide mortgage concern.  Turns out that this “friend” they rented to, who had very obviously done whatever he wanted as a tenant, had done much the same at work.  There were rumors of embezzlement, and one day, he just didn’t show up, and was never seen again!  I never heard what happened at work, but know that he not only skipped out still owing the upstairs folks rent money, but cost them money as he’d trashed their rental.  An expensive lesson they learned….never rent to friends!!  Strike #3!

Luckily, our rental history was much smoother.  We rented via three real estates in Ocean City, and had a web listing on Summer Shore Rentals that we used to rent directly.  Other than the annoying woman, who bitched daily about the noise from the new house being built down the street (our friends Patti and Meade), until we gave her back some money, we were lucky.  We had great repeat renters, who wrote lovely things in our guest book, and treated our beach house like their beach house.  We loved the location, and so did they. 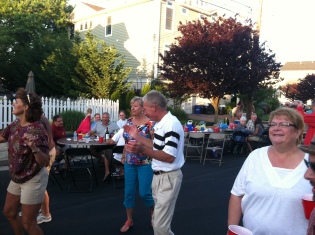 Other than the fact that we weren’t here for much of the summers, and we hated preparing the house for others to rent, we appreciated the money we made each summer, and loved using the house the rest of the year.  I’d have to say, that during the first 12 years or so of ownership, we were down in Ocean City on the average of 2 weekends a month.  We loved being down here, and as we spent more and more time, our Ocean City Family grew.  We attended weddings on the beach, parties at neighbors houses, Saturday night dinners out, several Pennlyn Place Block Parties, St. Patty’s Day and New Year’s Eve events, and even went to a couple of local fund raisers.  Let’s not talk about the Kentucky Derby party we went to one year where Susie “claims” I got drunk on Mint Juleps! 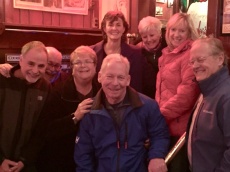 Yes, our plan to flip this house was long gone.  Turns out that even if we wanted to, there was no way we could leave Doc and Doie, Patti and Meade, Denise and Chris, Bob and Karen, Dale and Barbara, Rod and Helena, Georgia and Vinny, Jane and John or all the other folks we consider to be our Pennlyn Family!  Yes, we are anchored here in many ways, but the biggest for us by far, are the people that make up our Ocean City life!  That’s why it was an easy decision to make, when we had to decide where to retire.