I firmly believe that you can’t live in the past, but in a sense, it’s sad that so much from both my childhood and even our kids’ childhoods are gone now.  The house I stayed in way back in the 50s, the beach stand on the 32nd Street beach, and even Campbell’s Seafood have given way to new construction and the 3200 block of Asbury Avenue looks totally different.  In the same way, both “John’s House” and the beachfront house across the street from our last summer rental on Central Avenue have been razed for new construction.  Change is inevitable, and so change did come to Ocean City, as it did to our family.  The kids grew, vacations went in different directions, prices went up, and our expectations went down. 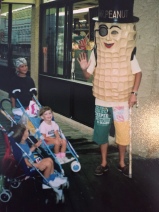 The summer of 1988 the D’Elia’s did Florida, including a week in Disney World.  If you think bringing two babies to the beach had been something, you should have seen this Florida trip with two 18 month olds and a 6 year old!  Boy did we have “stuff” loaded in that Ford van!  Even though that was our big trip, there still was a couple of days stop in Ocean City, and that’s the way we continued our Ocean City connection for many summers.  Wherever we went, whatever

else we did, there was at least a weekend in Ocean City.  In fact, for a number of years, Ocean City was a part of the D’Elia Family’s Memorial Day weekend!  It was fireworks on the beach on Long Island on Friday night, then Saturday morning it was off to Ocean City, where we’d walk the boardwalk, play mini golf, visit the arcades, and eat Hose Pizza.

[Okay…time for a little side bar here.  Our favorite boardwalk pizza in Ocean City was from Mack and Manco.  It turns out that rather than using a ladle to put the sauce on the pizza, the sauce came out of a hose when they stepped on a peddle.  When Billy was small, he started calling it Hose Pizza, which incidentally we still do!  Back to our story]

That was the way we got our Ocean City fix, but then in the summer of 1996, things changed.  We discovered camping!  That summer, we rented a small pop-up camping trailer from Tent City in Hempstead, and also had them put a hitch on our Ford van.  We made reservations to rent it for a week in July, and then set out to look for a campground on the shore.  Back in the 50s, when I was a kid, a ride along Route 9 in Cape May County was a

trip down a totally desolate stretch of road, bordered by forests.  In the 90s, it was more populated, and the home to many campgrounds.  After looking at a number of them, we picked out Pine Haven in Ocean View, NJ, just off Garden State Parkway Exit 17.  It was close to Ocean City (just about 13 miles up Route 9), but our “rent” for the week was more like what we’d have paid for one night in an Ocean City motel!

Billy was 10, Krissi and Kenny were 6, and we got to spend several nights on the Ocean City Boardwalk and even had a day on the beach!  There was a pool, a lake, mini golf, and even bingo at the campground, and a good time was had by all!  We thought that this could work! 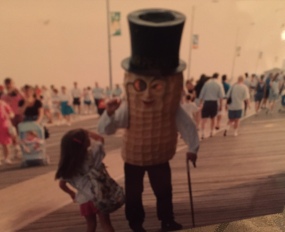 Attending a camping show the next winter, we came across the Tent City booth and told them we loved the last summer and were going to rent one again next summer, but for two weeks.  One thing led to another, and the next thing we knew, we owned a pop-up camper!  Two weeks the next summer at Pine Haven worked great, except for the 3 days in a row of rain we had.  The camper turned smaller and smaller each day it rained, but we were doing Ocean City on the cheap, and that was great!

Crabbing and Fishing at Ludlums Landing!

The next year, when I took the pop-up in to be serviced, I made the mistake of dropping Susie at the showroom, while I went across the street and dropped off the trailer.  By the time I got back, she’d found this incredible new and big camper on the display floor.  Two king sized beds, an additional single bed, a large storage cabinet, sink and stove, place for the porta potty, and a table that sat 6.  Yes, soon we were the owners of two pop-ups, but we quickly sold our original one at a price that the dealer said qualified Susie for a job selling atTent City!

And that’s how we did Ocean City for the next 3 or 4 summers.  We’d stay at Pine Haven (the kids had made friends there that they saw every summer), travel down route 9 to spend time in Ocean City, and do the two weeks for less than what a couple of nights in Ocean City would cost us!  That is, until a 12 year old Krissi told us she was tired of going to the bathroom with bugs, and the D’Elia’s camping days were over! 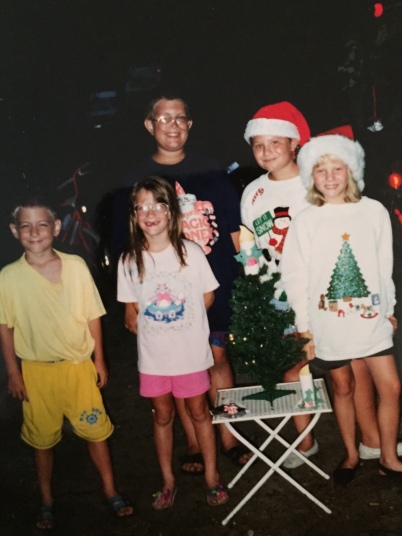 Then for a couple of summers, we rented Denise’s house on 50th Street and Asbury.  This was a great 3 bedroom 2 bath home that had more than enough room for us and everybody could invite friends to drop in, and they did!  About the same time, Susie and I got the idea that we might like to retire to Las Vegas one day.  We had family friends out there who were in the real estate business, and in 2003 we went out for a visit and decided to have a house built.  We had no intention of using it, but thought if we could rent it and pay for the costs of the house, it would be a great way to get our foot in the Vegas Real Estate market!

I know, you are asking, “What does you building a house in Vegas have to do with Ocean City, NJ?”…just hold on, and you’ll see!

Our friend Sharon Malloy showed us many areas, and knew what to look for and keyed us in on what was right for us.  Eventually we decided on the Maryland Heights development, in the South East part of Las Vegas.  We picked out the lot, decided on which of the 4 models we wanted built on the lot, went to the design center and picked out finishes, appliances, cabinets, and the like, and that was that.  In 3 months we were the owners of a beautiful new 1800 square foot 4 bedroom, 3 and a 1/2 bath home.  We were close to Henderson and about 6 miles from the strip, and as the surrounding property was not yet developed, had a view of the Strip from the master bedroom.  It was a beautiful house and thanks to a king-sized Aero Bed we’d shipped to Sharon, we were the first people to sleep in the house.  We even had company, because oldest son Billy was doing a semester in Los Angeles, and he came for a couple of days too. 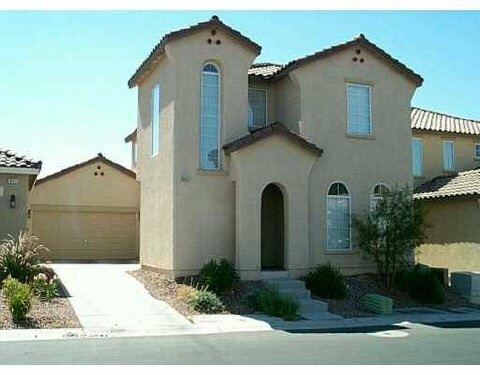 In very short order, the house was rented, for a price that allowed us to pay our mortgage and all costs associated with the house.  It was a reason to make 3 or 4 trips to Vegas, gave us a nice tax deduction, and the house was increasing in value.  What could be better?  Well, perhaps had the house been less than a 6 hour plane ride away, and something we might be able to use, but that’s a story for part 4!