I always got a kick out of those TV commercials for Ancestry’s DNA tests. I’d comment to Susie, “how can folks know so little about where their families came from?” I can understand for those who were adopted, or who grew up without one of their parents in the picture, but was always shocked by how little some folks knew or how wrong what they thought they knew was…like the guy who thought he was German, but turned out to be Scottish.

I mean, I had a very clear idea what my background was. My Mom was born in Aberdeen, Scotland, as were her Mom and Dad. My Dad was born in New York City with a 1st generation Italian/American mother, and a father who had come over from the Naples region of Italy as a young man. It was very clear in my mind that I was 50% Italian and 50% Scottish, end discussion.

Then for Christmas of 2016, Krissi, Kenny, Mike and Chris gave Susie and I Ancestry DNA kits. While like me, Susie was pretty sure of her ancestry, we loved the gift, and were excited to do the test, and see if there were any hidden secrets in our DNA. Early in January, we spit into the tubes, packed them up in their mailing cases, and sent them off. Very soon we got an email that they had received the kits, and that we could expect our results in 4 to 6 weeks. About 2 weeks later, we received another email stating that due to the high volume of kits received by them post holiday, figure more like 6 to 8 weeks until results would be available. Okay, so we’d wait.

March 27th, 2017 I got an email that my results were ready. I signed into the Ancestry site, and hit the DNA tab. This is what I found… 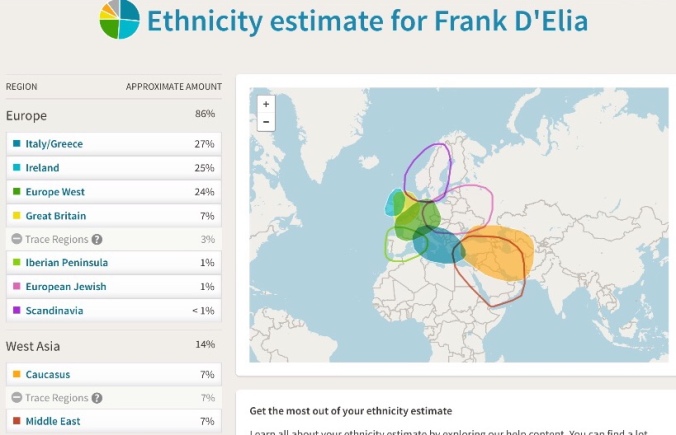 Okay, so Italy/Greece 27%, that tracks, but 25% Ireland? WTF??? Where did that come from?? IRELAND??? Well, I guess what I thought I knew, was not exactly the truth. Oh My God, I was one of those people in the TV Commercials!

I shared the information with my first cousin Jeanne. Jeanne is my Mom’s younger brother Bill’s daughter, who along with her husband Walt, is very involved in Genealogy. Walt can trace family back to the early colonial days of America, and they’ve done extensive searches through historical archives and cemeteries. In fact, a couple of years ago, they traveled to Scotland, and spent several weeks tracking our shared family. Frankly, she was stumped. She’d never found any evidence of an Irish connection on the Scottish side of the family. Could it be from the Italian side of my heritage? I pretty much figured that’s where a lot of the other listed ethnicities came from, but Irish?

Oh well, as the song goes, Don’t Worry, Be Happy!

So, Irish, huh? I have to be honest with you, although I have celebrated a time or two, and even did several parade remotes during my 40 years at ABC, I have never been a huge fan of St. Patrick’s Day. Always just seemed to me to be a day for drunks of all kinds and shapes to bother the rest of us. I remember driving to the ABC Building on 6th Avenue on a Saturday St. Patty’s Day a long time ago, and seeing drunks puking at the curb in front of every Irish Bar. I remember the already drunk celebrators on the 7:23 AM Long Island Rail Road train to Penn Station on weekday St. Patty’s Days, and I remember the folks who never seemed to leave Penn Station, who just hung around and drank all day. Oh, and I definitely remember the loud, obnoxious drunks of all ages, who would accompany me home on the 3:27 PM out of Penn every St. Patty’s Day! Then there was the year that St. Patty’s Day was on a Friday, and Susie and I were driving through the city, heading to Ocean City. She never really believed my stories of what happened in Manhattan every St. Patty’s Day, till we were driving down a block of 35th Street that contains several Irish bars, and in front of one, there was a very nicely dressed young lady, puking into the gutter while her two friends held her hair out of the way! No, not a huge fan of the way some folks celebrate the holiday, but to be honest, most weren’t even Irish!

But then there were years that we had a great time…like the year we were down in Walt Disney World with our friends Pat and Steve Grosskopf, and we celebrated St. Patrick’s Day by drinking our way around the world at EPCOT. Or the many years, our St. Patty’s Day celebration was corned beef and swiss cheese sandwiches with cole slaw (the cabbage), in our own home. Much nicer IMHO.

But this year was going to be different. This year I WAS IRISH! I had almost a year to contemplate this situation and to come to terms with my new knowledge. Would I have to learn to like Guinness? Would I be switching from vodka and rum to Irish Whiskey? Would I have a green outfit, that I wore just one day a year? All interesting questions as March 17th, 2018 approached. Frankly, after 67 years of figuring that my closest connection to the Irish, was that I was half Scottish and both the Irish and the Scottish liked bag pipes and wore kilts, what was my first St. Patty’s Day going to be as an Irishman??

Well, I’ll never know. For some reason, on the morning of March 17th, 2018, I clicked on the Ancestry Dot Com app on my iPad, and then clicked on the DNA tab, and the following came up.

What the hell? Suddenly, after almost a year of being Irish, now it was totally wiped out?? Huh???

This is what Ancestry’s out was:

“Latest Update as of March, 2018. Your DNA never changes, but the science we            use to analyze it does. We’re always collecting more data, and science is constantly improving, so your estimate may change over time.”

So that was that. My almost year of being Irish was over in the blink of an eye. No green beer or green bagels (thank God), no need to wear the blinking green tie I’d bought.

No drunken escapes as we chased a good time from bar to bar. We had a wonderful Corned Beef and Cabbage dinner, while Susie and I continued to drink Tito’s vodka and not Jameson.

All I can say is that the new DNA ethnicity report still contained my 1% European Jew, meaning I still have a legitimate right, to demand my Matzo fix every Passover!

2 thoughts on “Irish for a Year”