So, they all can’t be perfect, and today it was the weather that threw us a curve! When we got up about 8:00 this morning, the temperature was in the 70s, but the weather forecast said that it was a cloudy 70 degrees. It also called for sporadic rain, but as we were sitting around getting ourselves collected this morning, the sun came out, so we hoped that was a good omen!

We were very relaxed this morning, as both of us had a good night’s sleep, and were in no hurry to start our day. Then I re-read the check in information, and realized that breakfast didn’t stop at 11, but rather 10, and it was about 9:30 already. Not wanting to get there for the last dregs of breakfast, we decided to get into the car, and drive around a bit, and see what we could see, and then look for a place for a late breakfast/early lunch, so that’s what we did.

We started out with the windows and sun roof open, but soon we were getting rained on. It was not real rain, more of a heavy mist (what we call “misting”), but enough that we had to use the windshield wipers. Our first task was to find the local Wells Fargo bank to take some money out of the ATM. That task completed, our plan was to look for parking somewhere around Mallory Square, and spend a couple of hours wandering the streets and taking the Conch Tour Train through town. The rain was on and off, but we still figured we’d be able to get through the day. Guess where we ended up parking? At Mr. Buffett’s Margaritaville Resort and Marina. Having just recently opened, we considered staying there, till we did a dummy booking, and saw what the price was going to be. Let’s just say, that only the most well off Parrot Heads will be partaking from it’s hospitality. We went in the lobby, and figured we’d look around, but the lobby really just consisted of a check-in desk. Oh well, we had a place for the car, and now we were on foot. 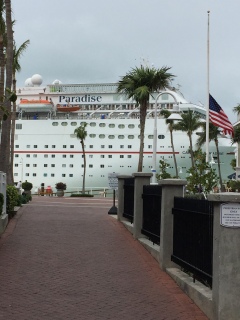 Right next door is the Museum of Art and History at the Custom House, with some interesting and large works of art in the courtyard.

We checked out a couple of tourist shops, but as we all know, we already own too much stuff, so no purchases were made. It was about 11:15, and the rain was still falling, so we thought we’d look for someplace to get a little something to eat. We spotted the Red Fish, Blue Fish restaurant, and decided to see if they were open. There were people inside, and indeed they were serving lunch, so in we went. We had an order of incredible Conch Fritters, then Susie had a Chicken Sandwich, and I had a Shrimp Po-Boy Sandwich. We both agreed we should have stopped with the fritters! Oh well, we were out of the rain, and had something in our stomachs! 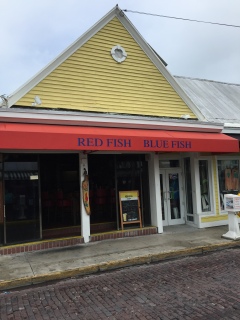 We pulled out our phones, and looked at the weather forecast, and even the radar, and it looked like the weather was going to improve. The radar showed the storm pulling out of the area by 1 PM. We had hopes for better weather as we walked over to the office for the Conch Train. The train in the station was full, but the signboard said the next one would leave at about 12:15. It was getting brighter by the minute, and we both decided to give it a try. I bought us a couple of tickets, and when the next train pulled in, we jumped on board. 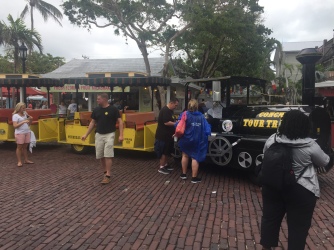 Launched in 1958, the train is about an hour plus tour in and around the old and new city of Key West. It passes lots of sights, and there is a narration conducted by the “Engineer” as you go around town, which brings up a question….why the hell do people take a tour that costs this much (our two Senior tickets me almost $60), and then proceed to talk through the entire tour! Here is a picture of the three loudmouths that talked, laughed, and even took phone calls through the tour!

These three couldn’t shut up till  they got off the tram!!

So we were about a third of the way through the tour, when the weather forecast proved wrong, and the heavens opened! Did we get wet? Yes, but it’s warm and wet, so not the end of the world. We enjoyed the sights we saw, and at one point, the 3 talkers got off, so we could hear the narration better! 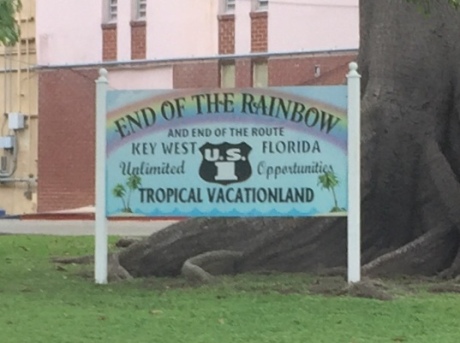 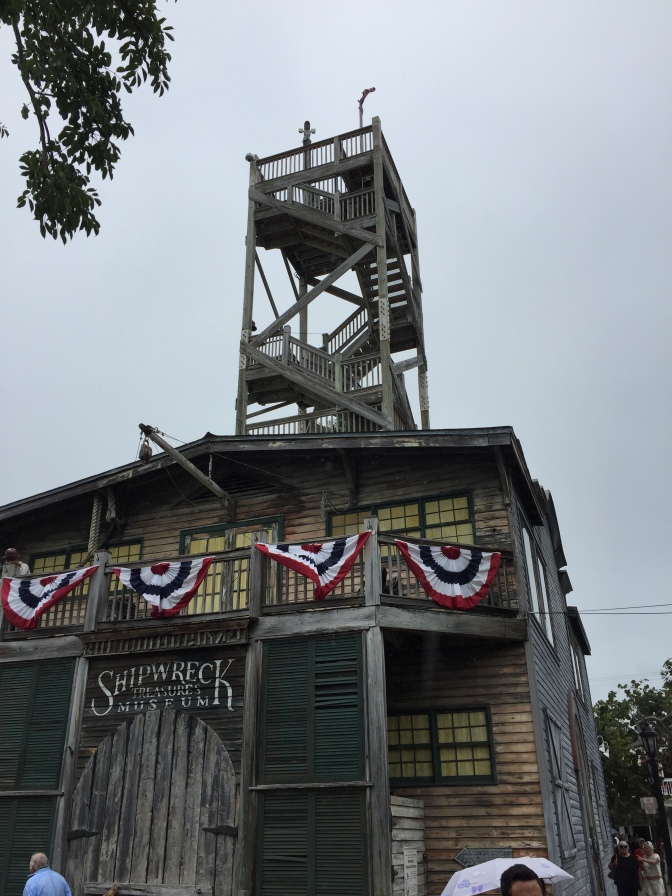 One of the sights you pass on the tour is the Southernmost Point Buoy that you always see in pictures. Hard to believe that there was a block long line of folks (maybe 75?) waiting to be able to take their picture by the buoy. I don’t know if this is an out growth of the “selfie craze” or what, but it’s a trend we’ve noticed happening more and more lately. People will wait in line for anything! 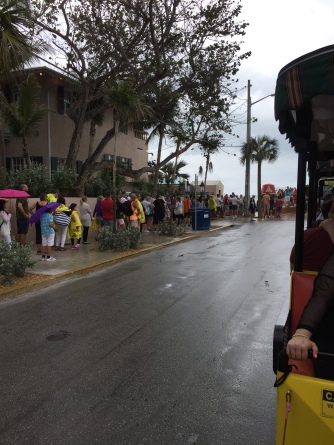 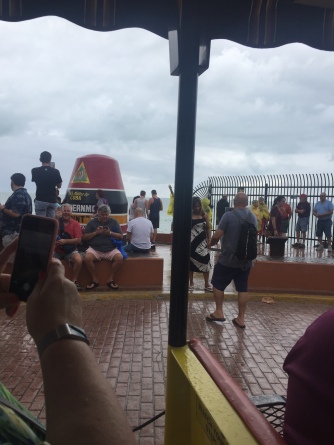 One thing that was obvious during the tour, is that the city is crazy! As quiet as the city was when we started out this morning, it was hopping now. Every bar was overflowing, and the sidewalks and shops were full of people! Bad planning on our part, in that this is President’s Day Weekend, but also there are 3 cruise ships in town. Key West is apparently a big cruise port, and with 3 ships in today, thousands more tourists were eating, drinking, shopping, and spending money. Key West is, after all, a tourist town!

So after getting off the train, and still being a little wet, we decided to get the car, and go back to the hotel for a bit. A drink, a shower, and getting ready for our 6 PM dinner reservation at One Duval at the Pier House Resort and Spa.

After getting ready for dinner, we took an Uber for $9.00 to the Pier House. We had a 6 o’clock reservation for dinner at One Duval, but first stopped at the Beach Bar for a Martini. After enjoying that, with a wonderful view, it was time for dinner. 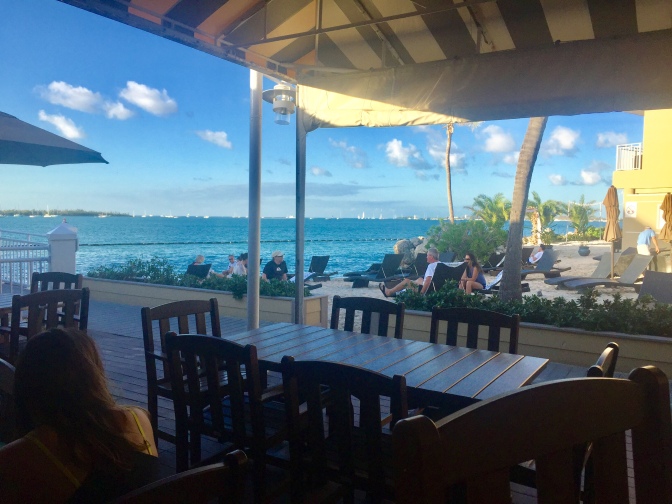 Then we moved up to One Duval, and what can we say, other than the fact that it was the absolute best dinner we have had on this trip!!! A great setting, wonderful food, and a great server!!! Take a look at these pictures of the setting, the sunset, and our meal, and see if you can raise a doubt! It was awesome!!! 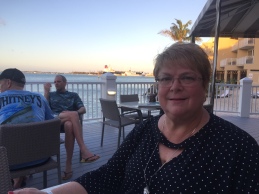 After a great dinner with our server Linda, (from Latvia) we moved back to the Beach Bar with bartender Merri! Some great conversation with other patrons (one of which had gone to high school with Merri in Massachusetts, and just wandered into the bar), a couple of more Martinis, and then Susie got Key Lime Colada to go! It was the perfect end to a perfect night! 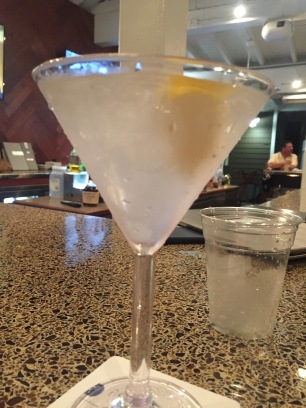 Honestly, we are not folks to hang at Sloppy Joes, and drink out of plastic cups, and hope that the guy next to us doesn’t puke on us! The Beach Bar at the Pier House was the perfect venue to end our night!!!

Then a $10 Uber trip home with Jorge, ended a perfect night!!! This is our version of Key West, and honestly, we loved it! It was one of our best nights of this trip. We’ve had several great nights, and this was in the top 5!! Thanks Key West!!!!

See you tomorrow when we head north again!! Hope your Sunday night was half as good as ours!!!