The evening of day Sixty One (I really can’t believe it, even though I just typed it) finds us at a Holiday Inn Express in Troutville, Virginia, having traveled 354 miles since we left Cookeville, Tennessee this morning. We had a lazy morning, sleeping in a little and skipping breakfast, and left the hotel a little after 10 AM. We gassed up and hit the Interstate, and although we did change from I-40 to I-81, we spent the entire day on the Interstate Highway System. Lunch consisted of cheese crackers and some packs of cookies from the food bag that’s been on the floor of the back seat since Day 1. Tonight’s blog is going to be a short one, as we really don’t have a lot to share with you.

This Holiday Inn Express is a first for us, having never stayed in one before, even though I did join the club, and have had the app on my phone since we left home. The hotel is nice and the room is large, but really looks like it could use some more furniture! Oh well, it’s got all we need, and that’s what’s important! Oh, another first tonight at check in…my Wells Fargo Visa card didn’t work! Now mind you, I have used this card virtually every day of the last two months we have been on the road. I have charged hotels in 22 states, and have used it in 3 foreign countries on the cruise. In the last 4 days, I have used it in Texas, Louisiana, and Tennessee, but tonight in Virginia, it wasn’t accepted! As soon as the man handed it back to me, I knew why. Even though I have used it all over the United States in the last 2 months, when I filled out the list online of where I was going to use it, I bet I didn’t say “Virginia”. Computers can’t think! Oh well, that’s the good thing about my American Express card…it works everywhere!

Now that we are traveling in more populated areas in the country, there is much more traffic on the Interstates, including more trucks. I remember back when you would always hear that long haul truckers, were the best drivers on the road. Sadly, I think that’s no longer the case. I fear, like with so many other professions (Cab Driver, Waiter/Waitress, Bartender, etc), people are doing it because they need to work, not because they are “professional” truck drivers! We have had huge trucks cut us off, as we were about to pass them in the left lane. We had one truck pull into the left lane just in front of us, attempting to pass another slower truck, and doing this all while heading up a hill. The end result was we too got to take the hill at 45 MPH when the speed limit was 70! Don’t get me wrong, we have also seen plenty of nut jobs in cars, doing some incredible things on the Interstate. Perhaps it’s just the dumbing down of the American driver! Bottom line is, this ain’t no video game…a truck can do some real damage to you at 70 MPH on an Interstate, so your task is to not get too comfortable, and have 3 pairs of eyes!

As in all of our travels, our constant audio companion in the Sonota is Sirius/XM’s Margaritaville Radio. Today they played a song that made us think about our good friends Sue and Jim Waniak in Somers Point! Jim is a huge Phish Fan, and we have heard many concert stories from him over the years! We’ll see you soon, guys!!

We are struck by how similar the countryside we have driven through the last two days, is to that which we know at home. Yesterday in Tennessee, Susie commented, “Looks like we’re approaching the Delaware Water Gap”. Today in Virginia we said, “Looks like upstate New York”. No beach, so we can’t say it looks like Ocean City, but it does have a familiar ring to it! Leaves are starting to change color here, even though it was 85 today, but not as much, I’m sure, as they have at home! 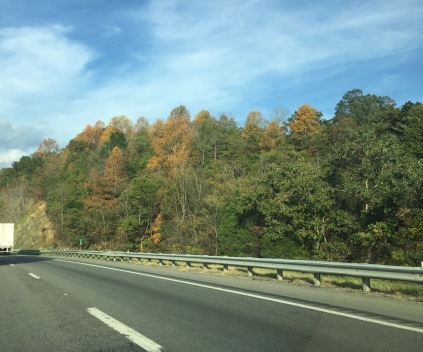 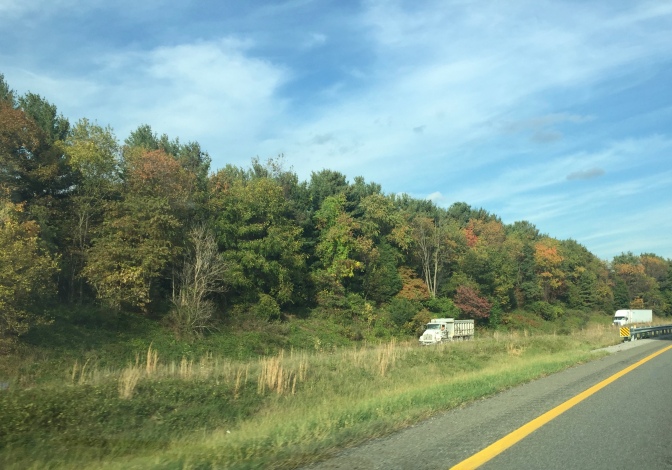 So, here’s a question for you…we came up behind, and then passed, this tanker truck today, and were trying to figure out what Dunkin Donuts might transport in it. If you have any clever ideas (our best was Donut Batter), why not put it in the comment section on Facebook, and we’ll see what everyone thinks!

Tomorrow we already have a reservation in Allentown, Pennsylvania at a Homewood Suites for our final night on the road of Our Big Adventure! We could have made it home in one day from here, but since I’ve got a cold (and Susie sounds like she may be getting it), and we really don’t want to get back to New York on a weekday and fight the rush hour traffic on the LI Expressway, we figured we’d stay one more night! So our last night on the road will be Day 62 and we will return to Mineola mid afternoon Saturday, on day 63 of the trip! Believe me, if we could wiggle our nose and be home, we’d be there already, but based on how we feel, one more night seems about right for us!

Off to dinner shortly at Cracker Barrel.

Have a great night…see you tomorrow!

PS – While sitting on the porch at Cracker Barrel waiting for our table, we started talking to this gentleman. One thing led to another, and we discovered that we were both born in Physicians’ Hospital in Jackson Heights, NY a lifetime ago. Anyone who doesn’t believe we live in a small world, has never been out in it!