Tonight finds us in a very nice Hampton Inn, located on the side of Interstate 40 in Forrest City, Arkansas. Today we traveled a total of 301 miles, having left the Horseshoe Hotel and Casino in Bossier City, Louisiana a little after 11 this morning. Before I go into today, let me update you a little on last night at the Horseshoe.

As I told you in yesterday’s blog, as the Horseshoe is a Caesar’s property, and since both Susie and I are Diamond Members (well, at least we will be till 2016 ends), our room cost us $0, and if you looked at the pictures in yesterday’s blog, you know it was a very nice room. Due to the free room, we decided to make a 6:30 dinner reservation at Jack Binion’s Steakhouse in the hotel, and trade a dinner bill for a room charge. In the end, we didn’t do that either, but I’m getting ahead of myself!

We changed (no denim shorts in the casino for me), and went down to the casino about 5:30, and thought we’d play a little. They are very serious about the age requirements here, and they have a big sign saying that they will card anyone who looks 35 or under. Susie kidded with a security guard, who said he thought she was about 28, and asked for her license! She promptly handed it over, and once he saw it was a NY State license, we had the “Trip Discussion” Nice guy, as was everyone we encountered! 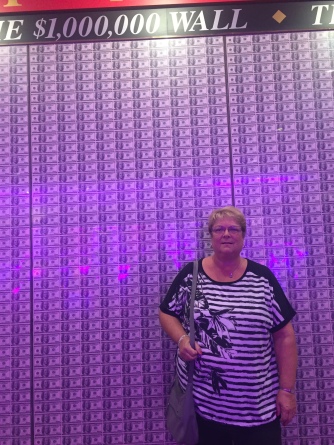 We played some video poker, and I won $100. We played some penny slots, and I won $100. The last thing we did before going to our dinner was play a $2 Double Wild Cherry machine. We used to play a similar machine on every trip to Harrahs AC, till the machine disappeared about a few years ago. This was a $2 two coin machine, so $4 a pull. Susie and I each put $20 in and played partners. We were very happy when we thought we won $245 only to realize when we cashed out that since it was a $2 machine, we’d won double that! Not too bad a session for a pre-dinner jaunt to the casino, but now it was time to head to the steak house!

Now, we are no strangers to steakhouses, having been to them in NYC, Atlantic City, Vegas, on the cruise and many other places, but we have to put Jack Binion’s right up at the top…probably the best ever! We started with a bottle of wine, then two incredible shrimp cocktails, and then we both had a great salad. Susie had a warm spinach salad, which she said was probably the best spinach salad she has ever had. A sucker for the traditional steak house wedge salad, that’s what I ordered. Incredible presentation, and the bacon was candied!!! Probably the best wedge salad I’ve ever had in a steakhouse!! Susie’s entree was a Filet Oscar which looked great, while I had the smallest cut of Prime Rib with Yorkshire Pudding! I’d hate to see the large cut, because the small cut filled the plate, and I only made a dent in it!

Of course, I had to be a pig, and ordered a baked potato too! Years and years ago, when I worked at WHN, we did a show from the Oak Room at the Plaza hotel, and ever since then I have been boring Susie with the tale of how when you ordered a baked potato there, they would remove the potato from the skin, mix it whatever you wanted added, and then pout it back in the potato skin. Well, now it’s the Oak Room at NYC’s Plaza Hotel, and Jack Binion’s Steakhouse at the Horseshoe Casino in Bossier City, Louisiana. And the best part…we used Harrah’s comps to pay for the meal! All it cost us was a tip!!

Check out time was 11, and after we slept as long as we desired, and showered this morning (the BEST shower of the trip!), it was very close to 11 when we vacated the room, and went down to the valet to get the car. We had a little trouble finding the beginning of our trek for the day – we think perhaps our GPS girlfriend was a little under the weather this morning, but eventually we were on the right path. With the exception of about the first 10 miles of the 300 we did today, the rest was on Interstates, and this is the first day we’ve done that in some time. We headed north out of Bossier City, and it really wasn’t long before we passed out of Louisiana and into Arkansas, so another state for our list. Susie says Arkansas was state #21 of our trip!

As we didn’t get a “free breakfast” this morning, we decided to do something we rarely had done the past 2 months, and that was stop at a fast food place for lunch. We’d see Whataburger for many days, and even this morning in Louisiana, but they must not cross into Arkansas, so we settled for a Burger King, in of all places, Hope, Arkansas, the birthplace of Bill Clinton! The exit is marked with a huge sign saying, “Hope, Arkansas…the birthplace of President William Jefferson Clinton”. I know they are trying to be respectful, but who ever calls him anything but Bill? Oh well, he is their home town boy!

So listen. If anyone else, like Susie and I, have been fascinated by, and contemplating going to Burger King and ordering a Whopperitto… don’t. On the TV commercials, it looked to me to be the basic inside of a Whopper chopped and put into a burrito, but in reality it’s more like something you’d get at Taco Bell, but with dill pickles added! It wasn’t the burger meat, but rather traditional taco meat, complete with the red grease dripping down your arm. Thanks, but we will stick with our traditional Chicken Sandwiches.

If you share driving, like Susie and I do, you are rather dependent on rest areas along the highways as an easy, convenient, and safe place to switch drivers. Back in the beginning of this trip, you may remember that Indiana and their “Toll Road” earned bad points from us for having so many closed rest areas. Well, sad to say, but Arkansas is another state that makes you either pull onto the shoulder to stop, or exit the road altogether, as so many of their rest areas were closed.

Stick a Fork in Us…We Are Done!!

At lunch today, Susie and I talked about our decision to head home, and we wondered if we should continue to stop at places or not. After a bit, we realized we were both of a mind that we are done, and being at home sounds like a great idea. So, our object now will be getting back to the East Coast, and we will probably stop at no more attractions on the way…including Graceland. The tour books say to leave a minimum of 3 1/2 hours to tour Graceland, and frankly we are not sure either of us have that much patience left, plus I’ve got a really rotten cold, and you know what a pain in the ass men are when they’re sick! After all, we are retired, and our time is ours, and a visit to Graceland gives us an excuse for another Road Trip!! As my cousin Jeannie said to me today on Facebook, “You know Road Trips are really a bit like retiring. There comes a point when you know it’s time to end it and move on.” It’s time!
****One Last Piece of Good News****

Just as I was about to call a wrap to today’s blog, we got the following email from Krissi, and I just had to share it with everybody, as proud parents are prone to do:

I am pleased to announce the promotion of Krissi D’Elia to the position of Senior Account Administrator for Weill Cornell Imaging at NewYork-Presbyterian (WCINYP). Krissi started as a Pre-Authorization Coordinator in May 2014. In July of this year, she was given a lead role in the pre-authorization department because of her reliability, dedication, and excellent teamwork. She has shown her ability to lead by example, and has continuously looked for ways to improve communication between our patients, referring physicians, and staff. She will utilize her widespread knowledge of our referring physicians and her expertise in customer service to continue to enhance WCINYP. She will be focused on expanding our pre-authorization department and creating efficiency in service delivery while maintaining the highest levels of patient and referring physician satisfaction.

Please join me in congratulating Krissi and welcoming her into her new role.

Director of Operations
Weill Cornell Imaging
NewYork-Presbyterian | Weill Cornell Medicine
1305 York Avenue, 3rd floor
New York, NY 10021”
Congrats to our favorite daughter, and a young lady we are very proud to call ours!! We know you will be great in the new role baby, and as with everything you have done in your life, Mom and I will be nothing but proud and supportive of you!