Susie and I woke in Nancy and Mike’s bedroom a little after 7, and decided to catch a shower before starting our day.  We exited the bedroom a little after 8, and went outside to sit in the beautiful Texas morning with Mike.  The weather was perfect, and we talked about the kind of weather, and seasons they experienced in El Paso.  Mike told us about the 9 inch snow fall they’d had last year, and about the cold mornings and warm afternoons, that were the norm for winter in El Paso.  Pretty soon Nancy joined us, and when it was established that nobody really wanted breakfast, we sat around for a couple of hours, talking.

I’m not quite sure what Nancy and Susie were talking about, but Mike and I talked a lot about the old days at WABC, and about things we both remembered happening when we worked there, and how retirement was going.  We also had lots of discussions that the 4 of us participated in, talking about kids, life expectations, travel, and just about everything that came into anyone’s mind.  Then Nancy suggested that we take a ride and let them show us around El Paso.  Sounded like a good idea, so we all grabbed what we needed, and headed out to the car.

By this time (around noon) the temperature had risen, and I’m not going to say it wasn’t hot, but the lack of humidity does make it a lot easier to take than a hot day in New York!  We drove through their part of town (they live on the West Side of El Paso), and they showed us some incredible houses, and great views.  Then we went past the University, and saw some of downtown El Paso.  The Rocky Mountains, that we drove over three weeks ago, and that have been so much a part of our travels since then, end in El Paso, and as we drove up Rim Road, around the very end of the chain, we had some great views of the city below, and views across the Rio Grand into Mexico.

The Southern End of the Rockies

It’s amazing to be so close to Mexico, and to stop at a scenic overlook, and clearly see the tall fence that separates our country from their’s.  We also saw the Border Patrol Agent that sits there all day (and probably night) in his car, watching for folks that might be trying to get over the approx. 10 foot tall fence!  The difference between what you see on the US side of the border, and what of Mexico you can see are quite a contrast.  Big buildings, highways, and lots of cars on the US side, and small buildings and what looked liked dirt roads on the Mexican side. 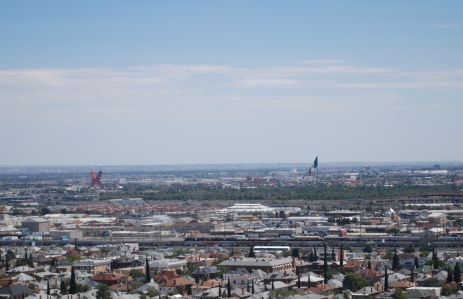 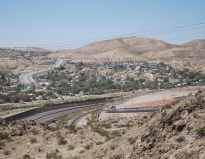 After our tour, the decision was made to go out for lunch, and then to just have some sandwiches at their house for dinner.  We decided to go the PF Changs , and the four of us had a very nice meal, and of course, lots more conversation.  Then it was time to get back to the house, so that Nancy could drop of Mike and me, so she could take off with Susie.  You see, Nancy had been able to score a 4 PM appointment with her hairdresser, to get Susie a trim, and thereby solving a dilemma Susie had, about what to do about her hair on the trip.  After the girls left, Mike and I sat down in the living room, and guess what…we talked some more!  Like I said yesterday, it’s like the past 30+ years that we haven’t been in contact, hadn’t happened, and it was just two old friends talking about anything and everything!

When the girls returned (lovely hair Susie…nice job Nancy), Mike again started up the blender, and there were more margaritas on the horizon.  This time, the four of us sat in their back yard, and although it was warmer than it had been that morning, it was still a really nice late afternoon.  We sat there talking (gee…big surprise, huh?) till Mother Nature treated us to a beautiful sunset, and then Nancy decided it was time to eat. 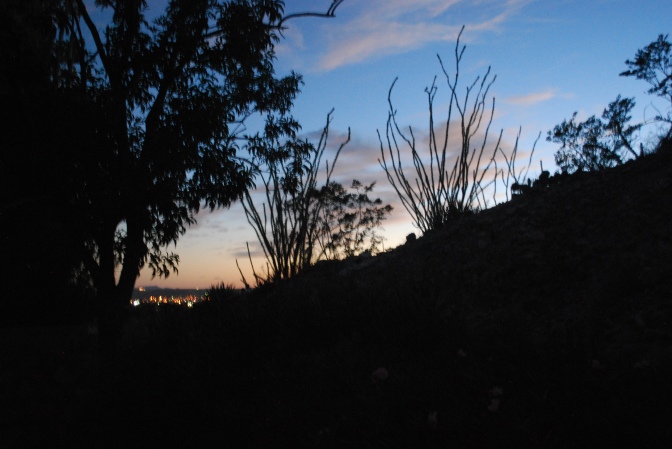 What a great idea, to have a nice lunch and then eat a sandwich later.  Really something we should do more often. Thanks Nancy for coming up with the idea, and supplying great sandwich fixings to boot!  After dinner clean up, the four of us adjourned to their lovely living room, and the conversation continued till about 11, when we all went off to bed!

When we got up and out this morning, Mike was alone, as Nancy and Sammy had journeyed to the Dog Park, and some fun for the four legged kids, and conversation for their Moms.  No strangers to conversation, we joined Mike in the back yard, and converse we did!  When Nancy got home, she proceeded to assemble a great ham and egg breakfast for us all, and over good food, with good friends, we had more great conversation.  As our time with our friends came close to ending, we realized that it really didn’t matter if we did big things, went for a ride, or just sat around their pool.  The conversation flowed, and it was obvious the four of us were very comfortable, and frankly, that’s something that doesn’t always happen.  Susie and I are so glad that we reconnected with Nancy and Mike, so glad that they asked us to stay with them, and so happy to find that a great relationship still exists!

It was with much sadness that we left their house, and it was with lots of hugs, promises to stay in better touch with each other, and the hope of Susie and I, that our two good friends can journey to Ocean City, and be our guests at the beach next summer.  I’m sure that if this two days proved anything, next time we all get together, there will be lots of great conversation!

So off we went to Interstate 10, and the 4 hour or so trip to where we find ourselves tonight, Fort Stockton, Texas.  Our whole trip was on Interstate 10, and at first we thought we were looking at a 5 hour trip, but then realized that before we got to Fort Stockton, we passed another time zone,  Right now we are back on the Central Time, so suddenly we lost an hour of our day.  The advantage we had of gaining that hour, when we crossed into a new time zone from east to west, is evaporating as we go back east, and very quickly it was 6:30 PM!  Susie had planned to do some laundry tonight, and we were fortunate again that the facility was on our floor.  The only problem was that as the washing and drying went on, the time got later.  Our solution tonight?  Well, as the drying cycle was in progress, we ran out to a McDonalds that was down the road, and picked up Two All Beef Patties, Special Sauce, Lettuce, Cheese, Pickles, Onions, on a Sesame Seed Bun.  Yes, two Big Macs!  We wondered if anyone not our age can recite that jingle?  Not a gourmet meal, but something we haven’t had in months, that was quick, and satisfying.  Had we waited till after the clothes were dry, we probably wouldn’t have gotten to a restaurant till after 8, so this worked tonight for us! 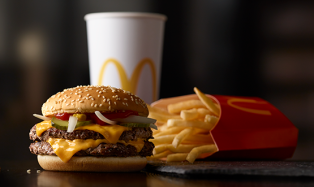 As I write this, it’s after 10 PM, but since we just changed from Mountain to Central time, its not that late for us.  The good news is that I’m all caught up, and back on track with the blog.  That’s good, but as we ship out on the Liberty of the Seas a week from tomorrow for 2 weeks, I realize it won’t be the last interruption of this blog before we drive back to New York.  Still haven’t figured out what I’m going to do, but fear there will be an interruption again, but as that’s still 7 days away, let’s just have fun in the present, and not worry about it.

Tomorrow we start 3 nights in San Antonio.  The River Walk, the Alamo, and a fun time for all…I hope!  See you tomorrow!