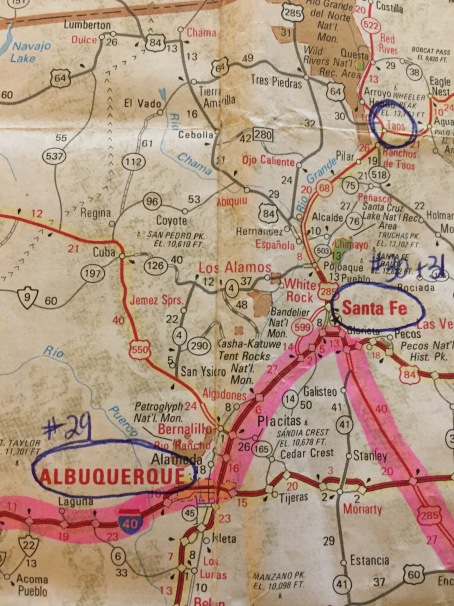 I’m going to tell you a little secret. Over the last 30 days of our trip, Susie and I have become snobs! Yes, I know it’s hard to believe, but it’s true, we like nice hotels! The Hampton Inn and Suites we were in last night is the kind of hotel that has spoiled us for the hotel we are in tonight! If you remember back a couple of weeks ago, we re-did a number of hotel reservations after a disastrous Rodeway Inn. Rodeways and Econo Lodges went bye-bye, and were replaced with Comfort Suites, Hampton Inns and Best Westerns. The one exception to that, is the hotel we are in tonight and tomorrow night, the Econo Lodge of Santa Fe, New Mexico. When we looked at the reviews for the hotel they were good, and when you consider that the two nights here are less than one night at last night’s Hampton Inn, it seemed like a no brainer. But, now we are here. Yes, the room is fine and the hotel is in a good location, but we are on the second floor and there is no elevator. There are very few lights in the room, no charging ports, and there is but one ice machine, which is also on the first floor (remember, no elevator). Not a bad hotel, but as I said up top, we have become snobs! Based on this, we just changed our accommodations in Roswell from a Rodeway Inn to a Comfort Suites…neither are run by aliens (and I mean the kind from other worlds)…we don’t think!

Today our target area was north of Santa Fe, the city of Los Alamos, New Mexico. If you remember your World War II history, you will recognize that as the home of the Manhattan Project, where they developed the atom bomb. One of our main reasons for traveling there today was the personal relationship it has to Susie. You see, during World War II, Susie’s Mom worked as a clerk typist for the government in the Woolworth Building in New York City. It was only after the bombs were dropped on Japan, that they all found out that they were working in the New York office of the Manhattan Project. She has a letter and a pin, thanking her for her service to the country, so we really wanted to see this place.

Our main stop of the day was the Bradbury Science Museum of Los Alamos. They have an extensive display about the Manhattan Project, and the continuing work at the Los Alamos National Laboratory, including two movies. We enjoyed the displays about the Manhattan Project, especially the real history displays of folks who worked there during the war. Some were scientists, some military personnel, and some were just young woman who were looking to do their part for the war effort. One young lady was a clerk typist, like Susie’s Mom, and like Susie’s Mom, knew nothing of what they were doing. Her quote was, “When asked what was being made here, the answer was, “We’re making windshield wipers for submarines.” I really had no idea what was going on here till after the bomb went off at Hiroshima.” It was a nice way to spend a couple of hours and to get a better idea of what the Manhattan Project was, how it all really came about, and the controversies.

On our way back to Santa Fe, we made another stop, one that I remembered from my childhood trip to California. You see, in 1960 when my Mom, Dad and I traveled across the country, we did so after my Mom and Dad finished the Cincinnati Summer Opera season. At that time, New York’s Metropolitan Opera, where they were both members of the chorus, did nothing during the summer months, so members were in demand for various summer opera seasons around the country. 1960 was the first of five years my folks worked at the Cincinnati Summer Opera, and on our trip, we visited Santa Fe to see some of my folks’ fellow Met members who were working at the Santa Fe Summer Opera. On our way back from Los Alamos on US 285, there was an exit labeled Santa Fe Opera, and I had to see if it was anything like I remembered. To say that the Santa Fe that I remembered from 56 years ago is different than the current Santa Fe, would be a severe understatement. I have pictures in my mind that do not correlate with the large city Santa Fe is in 2016, and the Santa Fe Opera is no different. Turns out that since it started in 1957, there have been three Opera Houses, all at the same location, so this one dating from the 1990s would have not been one I might remember. We took the ride anyway before heading to the hotel. 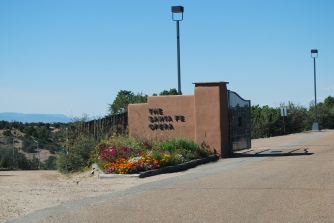 Tomorrow our emphasis will be on Santa Fe, which is the second oldest city in the United States. The only one older is St Augustine, Florida, which we visited three years ago, even if all we remember is the Tini Martini Bar next to the Hilton Hotel!!

At 7000 feet, Santa Fe is also the highest State Capital in the United States, and the model name of our son Kenny’s Hyundai! See, we have a lot of personal connections to New Mexico!

Have a good night…we will!