We started with a kind of leisurely morning in Idaho Falls today, having breakfast at the hotel, and pulling out about 9:30. Tonight we are in Ogden, Utah (just north of Salt Lake City), and we did about 248 miles today. We are no longer having those 500+ mile days we had at the beginning of our trip, because now we are combining getting some place, with seeing things, and today we had two good stops!

The first was a fun thing, The Idaho Potato Museum in Blackfoot, Idaho. If you remember back to when our trip was still in single digit days, we stopped one day at the Spam Museum and then had a photo op with a huge Green Giant statue. Susie joked in our blog that we’d had our protein and vegetables that day. Well, we completed the meal today in Idaho!! The museum is housed in an early 20th Century train station, which in itself was interesting to look at. All through the building there were exhibits on how potatoes are grown, why in Idaho, and how they are shipped all over the country. They even have a cafe when you can get fresh french fries, and chocolate milk that actually has potato flakes mixed in. The young lady at the counter said that it’s the best tasting chocolate milk she’s ever tasted, but we didn’t partake. A really neat exhibit they had was a whole wall of potato mashers. There were well over 300 of them, many kinds we’d seen before, but some really unusual, and interesting ones. After looking at the “wall of mashers”, we discovered it was a Boy Scouts Eagle Project! Because we were “out of staters, we got free taters” upon leaving. Our free taters, were Hungry Jack Scalloped Potatoes, which after reading the box, we found out are made in California! It was a fun place to stop, and although not as odd as the world’s biggest ball of twine, does complete our food museum triple play!

Next, we headed to the town of Montpelier, Idaho, and visited the National Oregon/California Trail Center. Susie has long been very interested in tales of the Oregon Trail, since reading a series of books called Wagons West. She also loved TV Westerns as a kid, and our whole family loved playing the video game “Oregon Trail” on the computer. It made sense to make this our second stop of the day, and it was well worth it.

They have, as all places like this do, the obligatory gift shop and cafe, but this center also had a bunch of static displays, a museum, and a collection of Oregon Trail art. What we really enjoyed though was the time travel they allowed us to do, as we joined an 1852 wagon train across the country. It cost us $20, but it was a small price to pay for a very enjoyable and educational experience. First we went to the gun shop, where we learned that every person above the age of 12 had to have a rifle at a cost of $20. Then on to the General Store, where he talked about what supplies a family would have to take on the journey, and how much it cost. Then we were taken to the wagon shop, where we learned that a Studebaker Covered Wagon would cost us $100 (yes…the same company that made cars when we were kids), and how much 6 oxen to pull it would cost us ($20 each for another $120). The total expense for a family of 6, to travel with the wagon train was approximately $1200, this in a time when the average annual wage in the country was $156. Our Wagon Master pointed out, that because of this cost, the members of the wagon trains were not wage earners, but by enlarge, people who sold businesses or farms, and who were putting their entire life’s wealth into this trip across the country. They truly had a lot at stake! 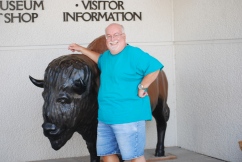 Then, we all got loaded into two covered wagons for an animated trip across the plains. As the wagons bounced and jerked across the rutted roads, we listened to excepts of letters and diaries, depicting the life that the members of the wagon train lived. It was moving and again educational. Then, our wagon train stopped, and we moved into a campsite, where one of the women of the train explained to us what every day on the trail would be like. It gave us a real look into what their life was like, what happened if a wife or husband died during the trip, and the hardships everyone faced. We also learned how they figured out how many miles they’d traveled that day, what they cooked with, and how they slept. It was incredible to think that this center was actually on the ground that many wagon trains traversed on their way from Independence, Missouri to the Oregon Territory! Then suddenly we were back in 2016! What a great way to spend 30 minutes of our day!

Our Wagon Master explaining our needs on the trail 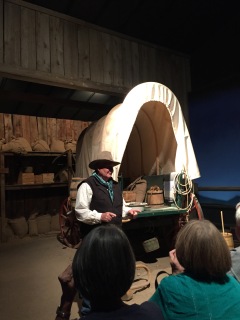 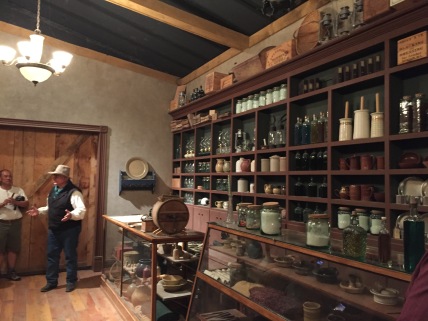 After a stop to use the bath room (as I was told by an old salesman at WHN Radio when I started there as a young kid, “Never bypass the opportunity to pee”), we were on our way to Ogden, Utah, and pulled into the hotel just after 4 PM. By the way, the total mileage on

our trip so far since leaving Long Island is 3088, as of pulling into the Ogden Sleep Inn tonight. It’s still incredible to us that we have driven so far since we left home! We both think that those weekend trips we made from Long Island, to Ocean City for the past 11 years we have owned the house, have made spending the day on the road easy for us. Whatever the reason, we haven’t minded the driving, or the roads, and we are still speaking to each other. Perhaps mark that up to the rum and coke we end each day with, and the vodka we end each night with! That and having a nice hotel, with a king sized bed to sleep in! Oh, and what with all the mountain driving, Susie has learned, and perfected, the art of putting the Sonata’s transmission into the manual mode, and down shifting! Good girl!!

So, something we’ve decided in the past week plus, is that we have the wrong cooler. We spoke about the wheeled cooler that we used going to Florida and how great it was. Well, not working out quite the same for us on this trip. Number one is that we hardly ever take it in the room with us. We have a little cooler bag that we use to transport a bottle of rum, a bottle of vodka, a 1 liter Diet Coke, 2 bottles of water, and our Lemon/Lime container. Most rooms have a fridge, so we transfer them to that upon check in, and then put them back in the bag the next morning. We thought we’d eat breakfasts on the road, but discovered that 9 out of 10 motels we are staying in offer a “free” breakfast. We know we are actually paying for it, but it comes when you upgrade to a nicer hotel, and we’ve decided that the $20-$30 extra we pay is well worth it for our comfort level. When we partake in the breakfast, we don’t have any need for lunch, so we just barely ate the ham and cheese we left home with before it went bad. A half gallon of milk we bought, went into the garbage at a rest stop yesterday unopened. We’ve decided that what we need is a smaller square cooler, that we can keep cheese and pepperoni in, that we will occasionally eat on the road. With some Goobers and Ritz crackers as a back up, we’re as good as gold. Lesson learned! Oh and another good idea that Susie had that has worked out perfectly..a change purse! Ever notice how much change you can get daily on vacation? It’s in our bag that goes into the hotel each night, and at the end of the day, we dump all the change we’ve gotten that day into it. Lighter pockets, and we had change last night for our laundry!

Some views around Ogden tonight on the way to dinner 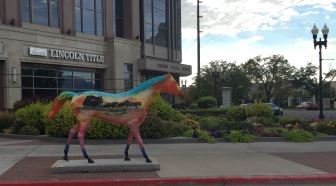 When we left the hotel tonight for dinner, our plan was to do as we have been doing…find a good sounding local place, rather than a chain. Susie found a place that sounded good…interesting burgers, and other meals. It was about 10 minutes from the hotel, so we plugged the address into the GPS and off we went. We found the place pretty easily, and even the parking lot next door. We got out of the car, walked to the front of the restaurant, opened the door, and realized that they were set up for what looked like a wedding! Damn..now what? Well, we went back to the car, Susie got on the iExit app while I went to Google. A couple of minutes later, Susie said with real surprise in her voice, “There’s an IN-N-OUT Burger about 10 minutes away!” “Do you want to go?”, I inquired. “Sure”, was her reply! All right…our first IN-N-OUT Burger in over a year!

For those of you who may not know, IN-N-OUT Burger is a West Coast fast food chain. All their meat comes from one of two company owned plants and is delivered fresh daily to the stores. Because of this, they are basically in California, and the South West, and I guess Utah!!! They hand cut the fries in the store daily, and have a very simple menu, with their only entree items being burgers! It is a favorite meal stop for us every time we are in Vegas (I know where all the Vegas area ones are located), and we’ve also eaten at locations in California in our travels. In addition to the regular menu, they have what’s called a “Secret Menu”, but it’s not really that secret! What we had tonight was Double Doubles, Animal Style with Animal Style fries! Heaven!! The burgers are great, the fries are so fresh, and going Animal Style is just the icing on the cake! Take a look at the attached picture, and if that doesn’t look good to you, then you are missing a real treat!! 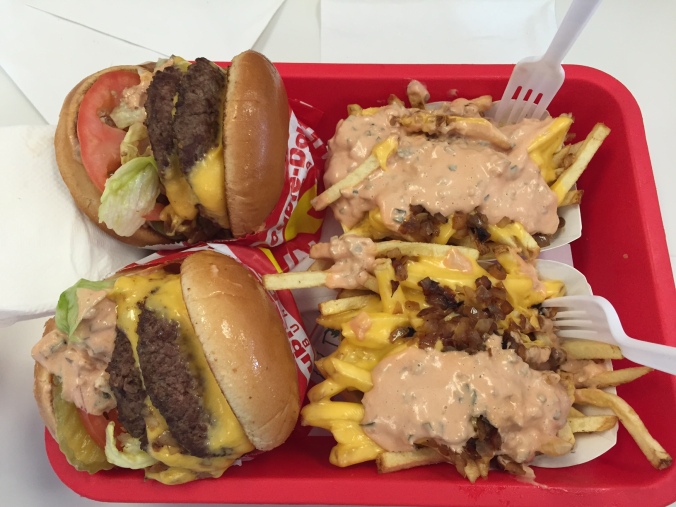 On the way back to the hotel we stopped for gas ($2.29 a gallon) and ice for the cooler and now we are back at the Sleep Inn. After the blog gets posted, our mission tonight is to write a few postcards, something we haven’t done on any of the days from 1-10! Let’s hope we are successful tonight!!

Tomorrow Salt Lake City, and then back into Wyoming for one night! Have a great night, see you tomorrow!

If you’d like to see IN-N-OUT’s “Secret Menu”, and figure out exactly what we had tonight, follow the link below to their “Secret Menu”!

One thought on “Day Eleven”