So, our first night in Walt Disney World was wonderful.   We love the Port Orleans French Quarter Resort, we have a great room, and we had an incredible first dinner at Wolfgang Puck’s Dining Room at Disney Springs.  A peaceful boat ride to and from dinner, and a night cap in the resort jazz club listening to some New Orleans Saxaphone player, and it was the perfect day.

We slept great last night,  got up this morning and discovered the room has a wonderful shower, and then it was off to breakfast…all in preparation for our first Disney Park of the trip…Epcot! 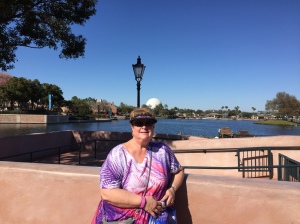 A number of years ago, when we were at Disney with the kids, we had a horrible experience waiting for the bus at Typhoon Lagoon to take us back to Fort Wilderness, and we vowed to never rely on the buses again.  So we drove over, Frank showed his retiree pass for free parking, and in we went.  We had one Fast Pass for this morning on the Test Track ride, and as it was our first time using Fast Pass with the Magic Band digital bracelets, we were amazed how easy and quickly we were on the ride.  Then the ride started…oh boy did it start!  Up and around a test track in an automated car up to speeds to 70 miles an hour, over bumps, around curves, up and down hills, until finally you stop…on a dime!!  Great way to start the day!

Then, it was off to World Showcase where we had a lunch reservation at Biergarten Restaurant in Germany!  Let us back up a bit, a give a little background before we continue.  A number of years ago, we were in Disney with our friends Pat and Steve Grosskopf and Pat’s brother Jamie.  It was our first time in years at Epcot, we were in the World Showcase, it was St. Patrick’s Day (and we were the only non-Irish of the group), and we hatched the plan to have a drink at every country in the World Showcase to celebrate St. Patrick, and a tradition was born! 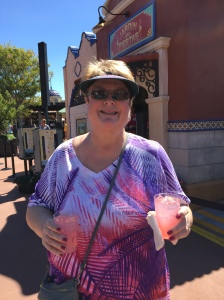 So after the Test Track ride, we journeyed over the bridge, into the Epcot World Showcase, and ran smack into Mexico!  As the saying goes, “When in Rome”, and since the first venue we came to was a little margarita stand, the first order of the day was a pair of flavorful, fruity margaritas!  It was after noon, we were in Mexico, and the challenge had begun!  Drink one in our World Showcase quest! 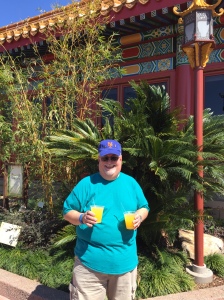 After a quick boat ride in the Mexico Pavilion with Donald Duck and friends, a brief visit to some of the shops of the pavilion, it was time to move on to our next country,  China!  By this time, it was well after noon, lunch crowds were starting to gather, so our drink line was a little longer.  Never the less, we stood the test of line time, and achieved our goal!  Two Mango Peach coolers with vodka were our “Chinese” drinks of choice!  Not sure what made these drinks Chinese, but we bought them at the same stand folks were getting egg rolls, and rice, and the like, so Chinese they were! Country number two, drink number two of the day.

The hour of our lunch reservation was fast approaching, so off we headed to Germany and the Beer Garden!  We’ve been there before, and they have a great buffet, with lots of German specialities, a German floor show, and did we mention, lots and lots of good German food?  The great German food, and Frank’s drink choice were our downfall however.  When in a German Beer Garden, what does one have to drink?  Well, the answer for Frank was beer…a really, really big glass of beer!  Sue, being the smarter of the two, also stayed in the German mode, but had a human sized glass of reisling, rather than a huge glass of beer!  As the old commercial went, “I can’t believe I ate (and drank) the whole thing”! 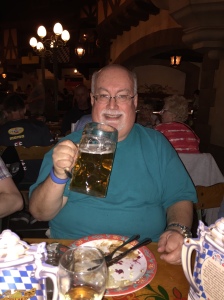 So, with the gallon of beer as drink number 3 (it probably should 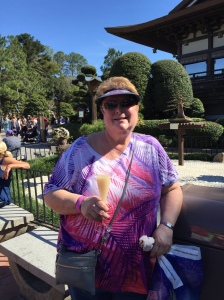 have been 3,4,5,6,7,8,9, & 10), and due to the influence of a lot of sausage, sauerkraut, not to mention spaetzle, we realized we were probably about at the end of our liquid refreshment for the day, but fear not!  As we walked around the rest of the World Showcase, what should we spot but the country of Japan, and an interesting little drink called a Plum Wine Slushy, served in a tall stem glass.  How could we resist!

So,  the count ends at a lowly 4, but we vow to return again someday, make better plans, and try again!  Tomorrow it’s off to the Magic Kingdom where we already have Fast Passes to ride Haunted Mansion, the Jungle Cruise, and Pirates of the Caribbean!  Sleep well…we know we will!