So, the end of day two finds us in Darien, Georgia at a very nice Comfort Inn.  Our room tonight is much nicer than the Days Inn was last night.  Lesson learned……You get what you pay for!  Today we traveled from Virginia, through North Carolina, South Carolina, and into Georgia.  Driving was good, but if some of the folks we’ve encountered on the road today, did what they did on 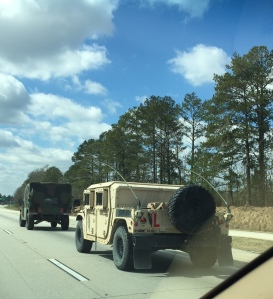 the Garden State Parkway or the New Jersey Turnpike, I think they’d be dead.  Lets just say, interesting drivers.  We’ve spotted license plates from 21 states, the District of Columbia, Official US Government, Quebec, Ontario, and a bunch of US Army Humvees in full battle gear, with no license plates.  We drove by Paris Island,  Pope Army Air Base, and saw huge GI helicopters come in low over I-95.

This morning, when we crossed from North Carolina into South Carolina, we passed South of the Border.  We’ve heard from friends that it’s a shell of what it used to be, and although we didn’t stop, it did bring to mind a story from one of our very early trips to Florida with the kids.

I guess we were nuts, or perhaps just didn’t know any better, but we loaded up our 1986 full size Ford van with two 18 month old twins, our almost 6 year old son, our baby sitter, and started down I-95.  Among the things loaded into the van were two porta cribs, which we unloaded and set up at every hotel.  Nuts, or what?

So, as we leave our first night’s motel, I notice that one of the tires on the van needed a little air.  I filled it before leaving, and when we got to the North/South Carolina border, we decided to stop at South of the Border to check the tire.  Once again it was low, so I decided to see if I could get it looked at.  The guy at the gas station in South of the Border said he had no empty lifts, but if I brought him the tire, he could fix it.

I went back to the car, got Susie, Eileen our baby sitter, Krissi, Kenny, and Billy out of the car, and started to jack up the van.  The way to jack up that generation van, was to slide the jack way under the frame, and then lift it off the ground.  Just as I was getting the jack under the frame, two Air Force fighter jets buzzed South of the Border at about 100 feet!  From that time on, Susie loved telling the story of how, when the planes flew over, I dove under the van, totally abandoning my wife and my 3 young children to protect myself!

So that’s my South of the Border story for today.  Tomorrow we have about 4 hours to Walt Disney World, and our reservations at Disney’s Port Orleans, French Quarter.  Tonight we are in 60 degree temperatures, tomorrow we’re hoping for the 70s!  Also, looking forward to using my ABC/Disney Retiree discounts!  Ah, retirement!!