When you are both working, and raising three kids, time is a very valuable commodity that you never seem to have enough of! But when you’re both retired, and your time is your own, it’s something that you have the option of using as you choose. Be it to read a book, binge watch a show on Netflix that you’ve wanted to see, or even to just sit on our front porch in the summer, and watch the drama and comedy of Pennlyn Place transpire, there’s time to do it all! Many retired folks say that they’re always so busy, they don’t know how they got things done when they were working, but we all know that is life. The job grows to fit the time allotted, and face it, there is more of that when you’re retired! That gift of time is part of every area of your retired life, and Susie and I love that we have it when we travel!

Ever since I retired in 2016, that diabolical stretch of Interstate 95 from the Delaware Memorial Bridge, to the city of Richmond, Virginia has been a part of our travels. On our our yearly trips down to the Sunshine State to enjoy a bit of summer in the winter and to now see our son Kenny and his husband Chris in St. Petersburg, it’s been there. The multiple times a year we head down to North Carolina to visit with our Son Bill, his wife Lori and our three Grandkids, 8 year old Layla, 6 year old Henry and 3 year old Annabelle, it’s been a part of our travels. That stretch of I-95 has been part of the beginning and end of every trip south out of Ocean City, and has become very familiar and also very hated!

The question always is not IF you’ll run into traffic, but rather WHERE and for HOW LONG? Will your travel schedule coordinate so that you get the EasyPass Express Lanes in Virginia going in your direction? Will I-95 or the Interstates that go around the big cities be your better choice? Where is the latest construction (because there has always been, and probably always will be, construction on I-95) that will affect your travel located? Will the way too many morons who drive badly cause a horrific accident that will shut the road you’re on down? All of these, and more, are valid questions that will affect your travel when driving this over-crowded corridor.

The absolute worst we’ve had, and the proverbial “straw that broke the camel’s back”, was a year ago, when we had Layla and Henry in the back seat of the CR-V, and we were driving down to Lori and Bill’s Lake House after having our two oldest Grandkids with us for a week in Ocean City. Their Lake house is just off I-95, shortly after you cross the border from Virginia into North Carolina, and should have taken us 6 to 7 hours at the worst. It took us closer to 10 hours, and not only did we crawl along in bumper to bumper traffic on I-95, but on several occasions the GPS routed us off I-95 to other roads where we also crawled in bumper to bumper traffic! There had to be a better way!

And luckily there was! Our son-in-law Mike’s Maryland living brother-in-law Gabe, suggested that we try US 301, which runs parallel to I-95 but to the east. We’d been routed off I-95 once onto 301 by the GPS several years ago, but until this fateful trip with Layla and Henry, had never really thought of it as a viable alternate. We’ve now done it several times and love it! When we went down to see the North Carolina Family back in May we took it and greatly appreciated the ease of the trip. When we went back to NC a couple of weeks ago, we were able to figure out how to get on 301 just after the Delaware Memorial Bridge heading south. Thanks to a conversation I had with our neighbor Meade just before we left on that trip, he pointed out that we could pick up US 301 off of Interstate 295 that runs around Richmond – they discovered that thanks to the GPS routing them off I-95 recently coming back from Florida. Doing a little old fashioned map work (remember maps), we discovered that we could get from I-85 (which we take to Lori and Bill’s in Wake Forest) to I-295 and totally avoid I-95!

Now, you may ask, “but is it as fast as going on I-95?” Well, if I-95 is running well, with no traffic, the answer is no. But realize that I-95, running through the Washington, DC corridor, is hardly ever running well with no traffic, and if you end up going the opposite way the Express Lanes in Virginia are running, it’s even worse. So the real world difference is often negligible, but either way, remember, we’ve got time! US 301 is a nice drive, with beautiful scenery,

You also get to experience some wonderful local places along the way, like Horne’s Restaurant in Port Royal, Virginia! We stopped on our way back up from North Carolina, had a late lunch (really the only meal we needed that day) consisting of a couple of great cheeseburgers, and two of the best milkshakes we’ve had since we were kids! Take a look and see if you don’t start salivating just looking at these pictures!

Oh, and if you’re interested in experimenting with US 301, here’s the directions we wrote up for us. It obviously starts and ends in Ocean City, but can also be used if you’re following I-95 or I-295 to the Delaware Memorial Bridge! Enjoy, if like us, time is on your side!

Directions to use US Rt. 301 rather than I-95 heading south of Washington, DC

This morning, a little before 9AM, we left our house in Ocean City, heading to Raleigh, North Carolina, and Father’s Day with our Son Billy, his wife Lori, and our two Grandchildren, Layla and Henry.  Having made this trip once before, for Layla’s birthday in April, we weren’t sure what kind of traffic we’d find on a Summer Saturday morning along Southbound I-95.  Everything was going fine, until we crossed into Maryland, and approached Baltimore.  Suddenly the GPS told us that there was “Severe Traffic Ahead”, and routed us off I-95.  Figuring we were just going  around Baltimore, we weren’t concerned, until the GPS said to follow US Route 301 for 99 miles to Interstate 95!

At first we were pissed that the GPS had routed us on this very congested road, surrounded by malls, fast food venues, and traffic lights….lots of traffic lights!  But then we got into less congested areas, and the road took on a kind of Route 66 existence. 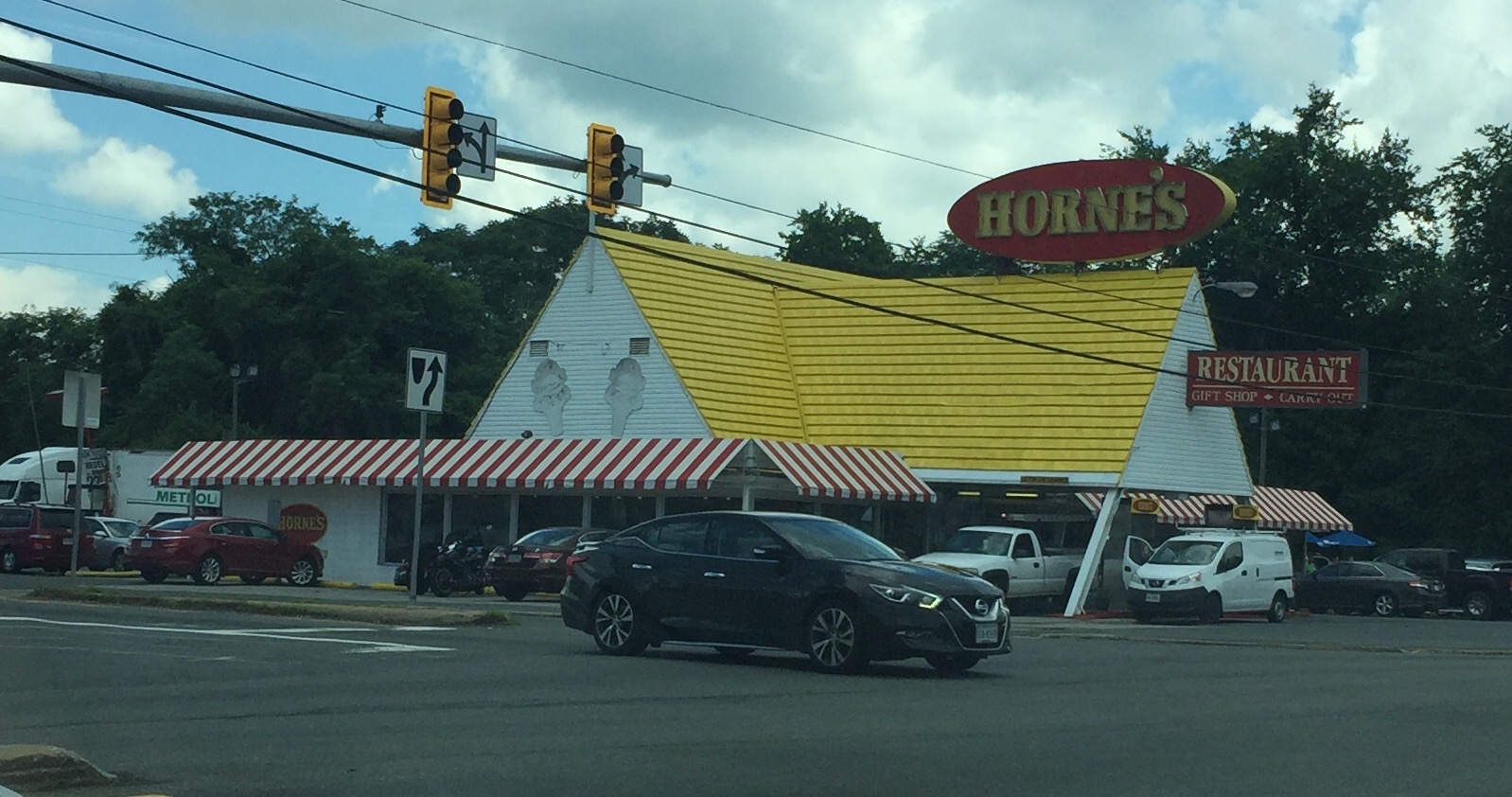 Old motels from the 50s, and local restaurants replaced the fast food joints and Hampton Inns.  The road was rural, with only a light every once in a while, and we were taken back to what the east coast was like before Interstate 95. Reminded me of road trips I’d made to Miami Beach with my folks, before the interstate existed.  Heck, we even saw several restaurants that had obviously been Howard Johnson’s back in the day.  All in all, not a bad way to spend some time on the road, especially if I-95 was crawling along, bumper to bumper!

Before we were re-routed by the GPS, we’d seen something we’d never seen before.  A tractor without a trailer, pulling a car, like you’d see a motor home doing.  I mention this, because after the almost 100 miles on 301, when we were about to join I-95 again, there was the exact same vehicle coming off I-95, meaning that they’d taken the same amount of time to traverse this section on I-95, as we’d taken on 301! Only thing was, we’d stopped for lunch, and hit the bathroom too, so we had scenery, lunch, a bathroom break, and done it in the same time!  Thanks Ginger Peach  (our GPS’ given name…by us)!