There is a reason that young people are the ones who have kids…just saying!

Today was our Granddaughter Layla’s 3rd Birthday, and during the course of a great day, Susie and I, along with our Daughter-in-Law’s Mom Kathy, spent the day with multiple kids, ages 10 to 1, and even the young parents looked pooped when the day was over!

The day started at 11 AM, when we gathered at City Barbecue, a new Carolina barbecue place that has just opened. If the food we had today, and the crowds that were there were any indication, this place is going to be a big success! Susie and I had delicious Pulled Pork sandwiches, and so much of the other food people had looked great! Lots of typical sides, but the hush puppies and the various barbecue sauces they had were to die for! This is apparently a small chain, and if today was any indication, it should be a much bigger chain!!

I pointed out to Billy, that even though they’ve just moved to North Carolina, he was exposed to North Carolina Barbecue in his formative years. Back probably in the summer of 1984, when Billy was not quite 3, we loaded up the car, and drove down to Kill Devil Hills, North Carolina, and visited Susie’s Great Aunt Evie and her Great Uncle Carl. Evie was Susie’s Grandmother’s sister, so she was Billy’s Great Great Aunt, and she ran the most delicious barbecue place called Midgett’s Barbecue! From her pork sandwiches, to her baked beans, to her cole slaw, to her barbecued pork, it was all wonderful! It was a great couple of days we spent down there as Evie and Carl were great people, and that was young Billy’s first exposure to real Carolina Barbecue, so in reality, it’s in his genes! 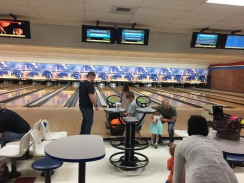 After an hour and a half at the barbecue place, Kathy, Billy and Lori, Henry and Layla, as well as Susie and I, Lori’s sister Kristen and her husband Billy, along with their 9 year old son Parker and 7 year old daughter Riley, journeyed to the bowling alley for some bumper bowling! The kids were all excited, as I think the two Dads were too! The 4 kids were set up on one lane, while the two Dads bowled right next door. That is, they bowled between holding little ones, and helping them get the ball down the alley! The bumpers were up, and the track used by the little ones to launch the ball was ready, and bowling shoes in the smallest sizes were in place! It was time for some serious Birthday Bowling! The 4 kids ranged in age from Henry at about a year and a half, to Parker, 9 going on 10. And what happens? Well, Henry William D’Elia, in his first game of bowling ever, comes out on top with a 103, thanks to a lot of help from Dad and Uncle Billy! The kid’s a natural!

Then we were scheduled for a little break, while Billy and Lori took the kids home to see if they could get them to nap for a bit! We were scheduled to reconvene at their house a little after 4 for more birthday and pizza! Gramma and Grampa were happy to go back to the Hampton Inn, and put our feet up for a few minutes, and when we got back to Billy and Lori’s at about 4:15, it turned out the kids had no interest in napping, as it was Layla’s Birthday!!! This time we were joined by Lori’s other sister Kerri and her husband Bill, along with their daughter Molly (6) and son Max (3), along with the D’Elia Family Dog, Beatrice (almost 3).

Now, let’s see if you were paying attention. Lori is one of 3 girls in the Bruno Family. Her sisters’ names are Kristen and Kerri. What are the names of the 3 sisters husbands? Ding…Ding…Ding! Times up. If you said Bill, Billy, and Bill, you’d be correct! Yes, as improbable as it may seem, all three girls married men who’s first name is William, so now there are two Bills and one Billy! We still call ours Bump, as we’ve done since he was born!

After some more birthday fun, including presents, the kids played while the Grandparents held down the fort (well, it really was the couch), played with the kids from time to time, and were Beatrice’s companions! Pizza was delivered and eaten, and the sun started to go down, so it was time for Kerri and Bill to head home, and for Layla and Henry to head to bed!

It was a great family day, filled with fun and much love, but the Grandparents were tired too (can’t even begin to imagine how tired the parents were), and time for us to say our good-byes, get our Grandkid hugs, and head back to the Hampton Inn! We will get up in the morning, partake of the “free” breakfast, and get back on the road and head home to Ocean City! It’s been a great weekend, seeing our kids new home, celebrating a birthday with our first Grandchild, and being amazed at how fast our littlest one has become more and more a little person! A great weekend, and we’re sorry to go, but we will be back in two weeks for Easter, and more Family Fun in North Carolina!

Thanks kids for a great weekend, and glad you had those two when you were young enough!