Today we took a brief detour from Wyoming to Montana, and had another goose bump moment thanks to our National Park Service!

We left Sheridan, Wyoming about 9 AM, and headed out westbound on Interstate 90 towards the Wyoming/Montana border. Our plan for the day was to first spend some time at the Little Bighorn National Monument in Montana, and then return to Wyoming and head towards Yellowstone National Park. The trip to Little Bighorn took us about an hour, and passed through some very desolate territory. Thank goodness we had a fairly full tank of gas when we left, because exits on the Interstate were mostly just cross roads with nothing on them. Several times after entering Montana, we crossed over the Little Bighorn River for which the battle was named.

As the National Park Service is still celebrating it’s 100th birthday, entrance to the monument was free…damn, when am I going to get to use my $10 Senior Pass again??? We parked and entered the visitor center, and after looking around the museum, we sat through a 25 minute movie, which laid out some of the reasons that led up to the battle. Then we went outside and sat through a 45 minute Park Ranger talk which told us about the battle, what happened, and why. Both were very enlightening, and gave us a much better understanding of the battle. It was very moving and a little troubling to really hear the facts of what we did, as a country to the Native Americans. Sad when you realize that the discovery of gold in the Black Hills was a pivotal episode in our treatment of the Lakota and other tribes.

Then we moved out to the actual battle field and headed up to the hill that is called Custer’s Last Stand Hill. There is a monument there that lists all that died on the hill, and under it are the aggregated remains of the enlisted men who died that day. The officers’ remains were sent home (Custer’s are at West Point), but the enlisted men were hastily buried after the battle in shallow graves. Several years later, the outrage of the American public caused the Army to return to the site, and that was when the monument was erected and the bones were buried in a mass grave beneath it. At the same time, they erected marble markers where each solder was killed. It is a very moving experience to see these white markers scattered all across the battlefield and realize that each mark was where a man lost his life. 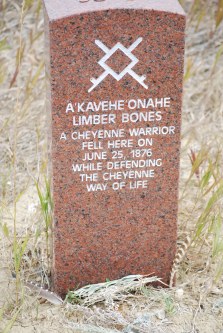 Then, it was time to head back to Wyoming, and return to our path to Yellowstone. Since I had driven up, and since we’d be returning over a lot of the same territory, Susie offered to drive and I accepted. We were back on I-90 (eastbound this time), across the Montana/Wyoming border, and 9 miles into Wyoming, we exited the Interstate. Susie had read about a road that was called “one of America’s most scenic”, and thought it would be a great way to head towards our destination for the night, Cody, Wyoming. What she didn’t read was that this road was so scenic because you drove over the Bighorn Mountains to get to Cody!! Again, driving through pretty desolate territory, the road slowly started to head into the foot hills, and before Susie realized it, she was driving over the Bighorn Mountains!! Switchback after switchback, climbing ever higher, the speed limit dropping from 65 MPH to low as 20 MPH on some of the curves, she continued. Finally we reached the top, and the sign that welcomed you to an elevation of 8327 feet! Susie admits a few sweaty hands during the climb, but she did great and she was proud of what she’d done, and so was I! 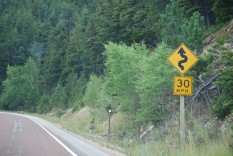 After we were about a third of the way down, we hit a rest area with bathroom facilities, took advantage of them, and I took over driving. All in all, we can see why they called it one of the most scenic roads in America, as it was beautiful, when you had the nerve to look over the side! The rest of the ride to Cody was uneventful, with a long straight road heading off into the distance (reminds me of Vanish Point), and about 4:30 we pulled into the Comfort Inn in Cody, having traveled 254 miles. 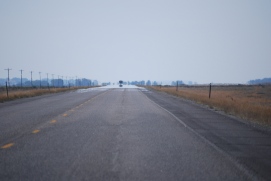 All along the trip, we have been very lucky with our choices for places to have dinner. Our food routine each day is to either partake in the hotel offered free breakfast, or to skip breakfast, and eat lunch out of our cooler. Yesterday we finished up the ham and american cheese rollups Susie made before we left, and this morning we had a very nice breakfast at the Comfort Inn in Sheridan, Wyoming. We always end our driving day with a Sailor Jerry Rum and Coke (some days, like today, they are very much needed after a particularly stressful drive), and then seek out a local place for dinner. Tonight we discovered Pat O’Hara’s Brewing Company Pub and Grill located a block from our hotel. It featured local brews and Irish Pub grub…what could be better? We started with Irish Egg Rolls and Susie had Shepard’s Pie, and I had tonight’s special…Corned Beef and Cabbage! Another good choice Susie!!

Notice the coaster under by “Atlantic City Lager”

We are now about 50 miles from the East Entrance of Yellowstone National Park, and tomorrow our destination will be the Yellowstone Lake Hotel in the park, where we have 2 nights booked. Our original plans had us leaving Yellowstone via the southern entrance and then driving through the Grand Tetons. Unfortunately, a lightning strike started a forest fire in the Tetons, which is burning across the road leading from Yellowstone to the Tetons, closing that southern entrance. We keep checking the daily reports, but it doesn’t look good for us to head that way on Tuesday, so we will probably have to leave via the western entrance. Then we will loop through Idaho and head south. We may make the Tetons this trip or not. You can’t fight Mother Nature, so we will take whatever path we can come Tuesday, and not worry about it till we get there. There are too many wonderful adventures ahead of us in Yellowstone National Park!

Thanks to all who are reading this blog and following along on our adventure with us. Wish we had room in the back seat for you, but you’d have to sit on the cooler and hold our map bag on your lap! Thanks for the likes and comments on Facebook, and thanks Laurie for the message today…you made our day! 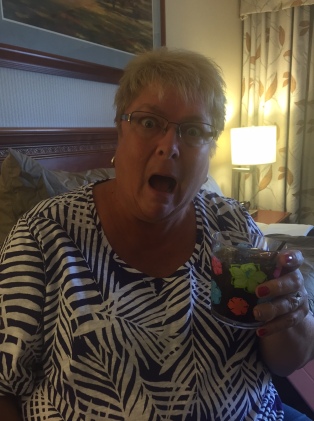 Susie and her much needed Rum and Coke tonight